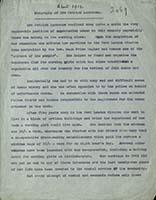 Mrs Pethick Lawrence realised when quite a child the very deplorable position of unprotected women in this country[,] especially those who belong to the working class. Upon the completion of her education she offered her services to the West London Mission then controlled by the Rev. Hugh Price Hughes and became one of the “sisters of the people”. She helped to found and organise the Esperance Club for working girls which has since established a reputation all over the country for its revival of folk dance and song.

Incidentally she had to do with many sad and difficult cases of human misery and she was often appealed to by the police on behalf of unfortunate women. In connection with these cases she attended Police Courts and became responsible to the magistrate for the woman prisoner in the dock.

After five years work in the West London Mission she went to live in a block of artisan buildings and tried the experiment of how much a working girl could live upon. She decided that the minimum was 15/– a week, whereupon she started with her friend Miss Mary Neal a co-operative dress-making establishment which paid its workers a miminim† wage of 15/– a week for an eight hour’s day. Several other schemes have been launched with her co-operation, including a holiday hotel for working girls at Littlehampton. Her marriage in 1901 did not put an end to any of these interests and the last twenty-two years of her life have been devoted to the social service of the community.

But every attempt at social and economic reform only drove more deeply home her conviction that so long as women were politically outside the pale of citizenship, the necessary leverage to life {1} working women and girls out of the morass was lacking.

In 1906 she became the first National Treasurer of the Women’s Social and Political Union. In the October of that year she suffered imprisonment for taking part in a protest in the lobby of the House of Commons. In 1909 she was arrested for leading a deputation for the purpose of presenting a Petition to the Prime Minister. In 1911 she was again imprisoned for a repetition of this offence. In 1912 she was arrested on a charge of Conspiracy and sentenced to imprisonment. On this occasion she adopted the Hunger Strike as a protest against the prison treatment and was forcibly fed. In the October of that year she was requested by Mrs Pankhurst to resign from the W.S.P.U. as Mrs Pankhurst had decided upon a development of the militant policy and did not want to be hampered by a Committee.

Great pressure was put upon Mrs Pethick Lawrence to found another Suffrage Organisation. To this she responded by forming the “Votes for Women” Fellowship—not a Suffrage Society, but an association of co-workers and Fellows to further a common enterprise, namely the establishment of the paper “Votes for Women” as the expression of the Suffrage Movement in its wide catholicity of ideal and purpose.