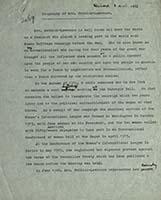 Mrs. Pethick-Lawrence is well known all over the world as a feminist who played a leading part in the world wide Woman Suffrage Campaign before the war She is also known as an internationalist who during the four years of the great war brought all the influence she possesses as a public speaker upon the people of her own country and upon the people in America to work for a Peace by negotiation and reconciliation, rather than a Peace dictated by the victorious armies.

In the Autumn of 1914, a cable summoned her to New York to address a vast suffrage meeting at the Carnegie Hall. On that occasion she helped to inaugurate the campaign which two years later led to the political enfranchisement of the women of that State. As a result of her campaign the American section of the Women’s International League was formed at Washington in January 1915, with Jane Addams as its President, and the two women sailed with fifty American women delegates to take part in an International Conference of Women held at the Hague in April 1915.

At the Conference of the Women’s International League in Zurich in May 1919, she registered her vigorous protest against the terms of the Versailles Treaty which had been published a few hours before the meeting was held.

In June 1920, Mrs. Pethick-Lawrence represented her country in an International Peace meeting in the German Reichstag in Berlin. She also spoke in the Mozarteum Great Hall in Salzburg, in the Town Hall, Vienna and in other towns on the “Women’s International League and Constructive Peace”.

She has since visited America twice and has been once to South Africa where she took part in the celebrations that welcomed the granting of woman suffrage in South Africa, the last dominion in the British Commonwealth to enfranchise its women. Mrs. Pethick-Lawrence is President of the Women’s Freedom League and vice-President of the Women’s International League, British Section,