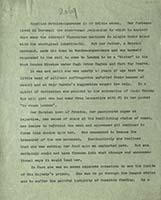 Emmeline Pethick-Lawrence is of Celtic stock. Her forbears lived in Cornwall[,] the rock-bound peninsular to which in ancient days came the intrepid Phoenician mariners to mingle their blood with the aboriginal inhabitants. But her father, a Bristol merchant, made his house in Weston-super-mare and she herself responded to the call to come to London to be a “Sister” in the West London Mission under Hugh Price Hughes and Mark Guy Pearse.

It was not until she was nearly 40 years of age that the little band of militant suffragettes unfurled their banner of revolt and at Keir Hardie’s suggestion sought her help. In a spirit of dedication she yielded to the entreaties of Annie Kenney[,] the mill girl who had come from Lancashire with £5 in her pocket “to rouse London”.

Her Cornish love of freedom, her passionate anger at injustice, her sense of shame at the humiliating status of women, her desire to befriend the weak and oppressed all combined to force this choice upon her. She consented to become the treasurer of the new movement. Instinctively she realised that she was setting her foot upon an uncharted path. But she certainly could not have forseen† into what strange and unconventional ways it would lead her.

In fact she was on seven separate occasions to see the inside of His Majesty’s prison. She was to go through the hunger strike and to suffer the painful indignity of forcible feeding. As a treasurer she was to raise a campaign fund of over a quarter of a million pounds and to become known as the most seductive beggar in London. In all this she was sustained by a strong inner sense of mission; and she was fortunate in having what was denied to many others of the suffragettes[,] the active support of her men folk—her father, her husband and other relatives and friends.

The file number ‘2069’ has been written at the top of the first sheet in pencil.