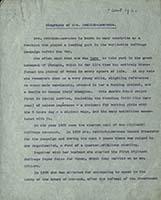 Mrs. Pethick-Lawrence is known in many countries as a Feminist who played a leading part in the world-wide Suffrage Campaign before the War.

She often says she was born to take part in the great Movement of Thought, which in her life time has entirely transformed the Status of women in every sphere of life. At any rate she remembers that as a very young child, slighting references to women made carelessly, aroused in her a burning protest, and a desire to become their champion. This desire found outlet first in Social Service, including the founding (with Miss Mary Neal) of Maison Espérance—a Business for working girls with the 8 hours day—a minimum wage, and the many activities associated with it.

In the ear 1905 came the clarion call of the Militanti† Suffrage Movement. In 1906 Mrs. Pethick-Lawrence became Treasurer for the Campaign and during the next 6 years there was raised in one organisation, a fund of a Quarter of Millions {1} sterling.

Together with her husband she started the first Militant Suffrage Paper Votes for Women, which they carried on as co-Editors.

In 1908 she was arrested for attempting to speak in the Lobby of the House of Commons, after the refusal of the Government to receive a Deputation of Women (that had come to put their case) had been announced to them by the Police. Subsequently she was arrested twice for leading a Deputation to Parliament, and once under the old Conspiracy laws. In the latter case she was sentenced to 9 months and placed in the 1st division. The majority of her fellow suffragists in prison were not accorded the same treatment as political prisoners. They protested by the Hunger Strike, and she made common cause with them, was forcibly fed and subsequently released, having served five weeks of the 9 months sentence.

In the Autumn of 1914 a cable summoned her to New York to address a vast Suffrage Meeting in the Carnegie Hall. On that occasion she helped to inaugurate the campaign which two years later led to the political enfranchisement of the women of the State. Further she called up {2} the Women of America (this the greatest of the neutral Powers) not to become obsessed by the War spirit but to combine their allegiance to the principle of arbitration and to work for a real settlement rather than a fight to the finish. She travelled from the East to the West of America, speaking everywhere of the Solidarity of women as the Mothers of the human race and therefore the {3} natural Peacemakers. As a result of her campaign the Women[’]s Peace Party (afterwards the American Section of the Women’s International League) was formed {4} with Jane Addams as its president, and the two women sailed with fifty American delegates to take part in an International Conference of Women held at the Hague in April 1915. It will be remembered that this Congress representing 16 nations was unanimous in urging a Peace by Negotiation, and that a delegation appointed at the Hague was received by several Chancellors in Europe, by the President of the Swiss Republic and by the United States; it was also received by the Pope. On behalf of the women of the world this delegation pleaded for a continuous Council of Mediation and Reconciliation to be formed by the Neutral States, in order to conduct negotiations between the warring Powers, and if possible secure an understanding and a[n] agreement which would avoid a fight to the finish and its consequent devastation of the whole of Europe.

Mrs. Pethick-Lawrence has continued up to the present moment to work towards the Removal of all legal Restrictions upon the equality and freedom of the sexes, also towards and for the practical realization of the solidarity of the Human race (rooted in the Solidarity of women of all races as political {5} Mothers) which demands the abolition of Poverty and War.

Carbon copy of a typed original, corrected by hand. ‘? About 1920’ has been added by hand at the top of the first sheet. A few mistypings which are not easy to represent in print or describe briefly have been corrected, as noted below.