Item 12a - Biographical note on Emmeline Pethick-Lawrence, to accompany an article by her published in South Africa 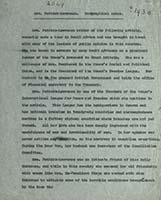 Biographical note on Emmeline Pethick-Lawrence, to accompany an article by her published in South Africa

Mrs. Pethick-Lawrence[,] writer of the following article, recently made a tour in South Africa and was brought in touch with many of the leaders of public opinion in this country. She was known in advance by many South Africans as a prominent leader of the Women’s Movement in Great Britain. She was a colleague of Mrs. Pankhurst in the Women’s Social and Political Union, and is the President of the Women’s Freedom League. Her husband is in the present British Government and holds the office of Financial secretary to the Treasury.

Mrs. Pethick-Lawrence is one of the founders of the Women’s International League for Peace and Freedom which she mentions in this article. This League has its headquarters in Geneva and has national branches in twenty-six countries and correspondence centres in a further sixteen countries where branches are not yet formed. All her life she has been deeply impressed with the wast[e]fulness of war and irrationality of war. In her opinion war never settles any question, on the contrary it unsettles everything. During the Boer War, her husband was Secretary of the Conciliation Committee.

Mrs. Pethick-Lawrence was an intimate friend of Miss Emily Hobhouse, and while in this country she renewed her old friendship with women like Mrs. Ex-President Steyn who worked with Miss Hobhouse to mitigate some of the horrible conditions brought about by the Boer War