Item 61 - Carbon copy of a letter from F. W. Pethick-Lawrence to Aldous Huxley 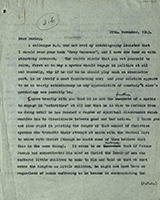 Carbon copy of a letter from F. W. Pethick-Lawrence to Aldous Huxley

Praises his book Grey Eminence, and discusses the involvement of mystics in politics. Refers to Gandhi’s inflexibility on certain subjects, and suggests that his policy may result in calamities comparable to those created by Father Joseph.

A colleague M.P. {1} who had read my autobiography insisted that I should read your book “Grey Eminence” {2}, and I have now done so with absorbing interest. The double riddle that you set yourself to solve, first as to why a mystic should engage in politics at all and secondly, why if he did so he should play such an abominable part, is in itself a most fascinating one; and your solution appears to me as nearly satisfactory as any appreciation of somebody else’s pyschology† can possibly be.

I agree broadly with you that it is not the function of a mystic to engage in “activities” at all and that he is wise to refrain from so doing until he has reached a degree of spiritual discernment which enables him to discriminate between good and bad action. I think you are also right in pointing the danger of that school of Christian mystics who transfer their attempt at union with the Central Life to union with Christ (though no doubt some of them believe that this is the same thing). It seems to me moreover that if Father Joseph had concentrated his mind on Christ the Lover of men who suffered little children to come to Him and told us that we must enter the Kingdom as little children, he might not have been so regardless of human suffering as he became in contemplating the sufferings of Christ on the Cross.

Of course it is in general true that a man of some eminence in his own sphere should hesitate before entering a sphere other than his own. I have noticed the unfortunate result of neglecting this in many cases and I have noted also that the most eminent are usually too wise to fall into this mistake.

But for those whose sphere is religion and who have attained to {3} some measure to union with the Central Life the danger is much greater, both for themselves and also for the public who are wont to assume that their saintly life has given them a discernment in worldly af[f]airs which they do not necessarily possess. I was reading in The New Statesman a few weeks ago a remark which it is said was used by Oliver Cromwell to a number of Northern Ireland Divines “I beseech you in the bowels of Christ to think that ye may be mistaken”. The religieus† i4} is apt to assume that he is never mistaken and the words that fall from his lips belong to the category “Thus saith Zoroaster”.

I expect your mind has turned, as mine has done, from the mystic politician of the 17th century about whom you write to the Mahatma politician of our own day. I wonder whether it has occurred to you to write a companion volume dealing with his “activities”? If not, perhaps some future writer a century or two hence will write up the story and sum up the result in somewhat the same way that you have done with regard to Father Joseph.

I do not of course attribute to Gandhi the political malpractices performed by Father Joseph which seem so disreputable to us and even to his contemporaries. I have known Gandhi personally for a great many years and have been a great admirer of him; and I know his meticulous care to be fair and just. Nevertheless the result of his policy may bring upon India and indeed upon the whole world calamities comparable to those which Father Joseph created. I will give you three examples:—

1) Gandhi feels deeply the spiritual wrongs inflicted by Hindu castes on the untouchables and has his own approach to this question. But the untouchables must be saved his way and this makes him very intolerant of Ambedkar the leader of the untouchables. I saw this myself on the Round Table Conference and its sequel.

2) Gandhi preaches the spiritual view of continence. Therefore he will have nothing to do with birth control. But Gandhi’s spiritual doctrine is quite above the heads of the vast mass of his fellow countrymen. Therefore we have the appalling picture of an India already over populated, having some 50 million extra souls to its population in the course of the last ten years.

3) Gandhi has a spiritual conception of the independence of India. This makes him intolerant of any compromise and I think there is no doubt that it was his influence which caused the Cripss† olive branch to be rejected in the summer of 1942. This has resulted in the further drawing apart of the Hindus & British, of the Moslems & British, and the Hindus & Moslems; and though one can never predict the final closing of the gates of mercy, it may prevent a peaceful solution of the Indian problem for many years to come. I think that Gandhi himself has envisaged the breaking out of civil war.

In conclusion may I say once more what a great service I think you have rendered in writing such an amazingly interesting and penetrating book.

{2} A study of François Leclerc du Tremblay (1577–1638), a French Capuchin monk more commonly known as ‘Père Joseph’ or ‘l’éminence grise’ (the grey eminence). He was the confidant and agent of Cardinal Richelieu, ‘l’éminence rouge’.

{4} Typed ‘religieuse’ and altered by hand to ‘religieus’.