Item 246 - Carbon copy of a letter from F. W. Pethick-Lawrence to Anthony Eden 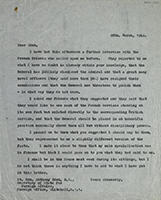 Carbon copy of a letter from F. W. Pethick-Lawrence to Anthony Eden

Gives an account of a further interview with his French friends on the dispute between the General (de Gaulle) and the Admiral (Muselier).

I have had this afternoon a further interview with the French friends who called upon me before. They reported to me what I have no doubt is already within your knowledge, that the General has publicly dismissed the Admiral and that a great many naval officers (they said more than 50%) have resigned their commissions and that the General now threatens to punish them—in what way they do not know.

I asked our friends what they suggested and they said that they would like to see each of the French Services standing on its own feet but related directly to the corresponding British Service, and that the General should be placed in an honorific position nominally above them all but without disciplinary powers.

I passed on to them what you suggested I should say to them, but they represented to me a slightly different version of the facts. I made it clear to them that my main specialisation was in finance but that I would pass on to you what they had said to me.

I shall be in the House next week during its sittings, but I do not think there is anything I have to add to what I have put in this letter.