Item 319 - Carbon copy of a letter from F. W. Pethick-Lawrence to Herbert Morrison 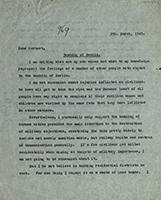 Expresses his opposition to any change in policy that would lead to the bombing of residential districts in Berlin.

I am writing what are my own views but what to my knowledge represent the feelings of a number of other people with regard to the bombing of Berlin.

I am not squeamish about injuries inflicted on civilians. We have all got to take the risk and the Germans least of all people have any right to complain if their civilian women and children are visited by the same fate that they have inflicted on other nations.

Nevertheless, I personally only support the bombing of German cities provided the main intention is the destruction of military objectives, construing the term pretty widely to include not merely munition works, but railway depots and centres of communication generally. If a few civilians get killed accidentally when aiming at targets of military importance, I am not going to be squeamish about it.

But I do not believe in bombing residential districts as such. For one thing I regard it as a waste of good bombs. I do not attach value to the notion that it weakens morale. It might do so with a cowardly nation. But there is no reason to suppose that the Germans, though they have many grievous faults, are cowards. Our own experience teaches us that bombing stiffens our resistance and makes us more determined to fight on to the bitter end.

If then the arguments for and against bombing civilians are roughly equal, it seems to me to be better to avoid doing so in view of the fact that so doing will make reconstruction after the war more difficult.

In writing the above, I am not suggesting that we have changed our bombing policy from attacking military objectives to attacking civilians. It may be that our policy remains as before. I do not know, but if so, I am writing lest a change should be contemplated and you will no doubt give such weight as you think proper to my point of view.