Item 320 - Carbon copy of a letter from F. W. Pethick-Lawrence to Herbert Morrison 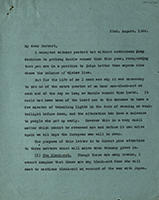 States his objections to recent alterations in black-out regulations. Recommends measures to be taken after the war in connection with the black-out, single summer-time in winter, and double summer-time.

I accepted without protest but without enthusiasm your decision to prolong double summer time this year, recognising that you are in a position to judge better than anyone else where the balance of wishes lies.

But for the life of me I cant† see why it was necessary to rob us of the extra quarter of an hour non-black-out at each end of the day so long as double summer time lasts. It could not have been of the least use to the Germans to have a few minutes of twinkling lights in the dusk of evening or semi-twilight before dawn, and the alteration has been a nuisance to people who get up early. However this is a very small matter which cannot be reversed now and before it can arise again we all hope the European war will be over.

The purpose of this letter is to direct your attention to three matters which will arise when Ger-many gives in.

(1) The Black-out. Though there are many cranks, I cannot imagine that there are any black-out fans who will want to continue black-out on account of the war with Japan. Therefore I take it for granted that the black-out will be lifted. The point I want to make is that you should have arrangements made to announce this, and to get the Local Authorities to lift the black-out in the streets, the very day that the armistice (or whatever form the capitulation of Germany takes) is declared. There will probably be demonstrations all over the United Kingdom that very night (which may well be in the winter) and, if the black-out is still on, deaths and injuries are very likely to arise.

(2) Single summer time in winter. There are of course some people who habitually breakfast at 9 o’clock who regard a shift of hours as a net gain of an hours† daylight in the day. But for the rest of the peopulation† who get up to go to work, summer time in winter simply transfers an hour of dark in the evening to the morning and in reality means that they never see their homes in day-light, except on Saturday afternoon and Sunday, for some five or six months in the year. It seems to me that, if people want this rearrangement of the day, the right way would be to alter business hours generally and not to play about with the clock. In any case I suggest to you that it is a mat-ter for Parliament and not for the exercise of your war-time powers (when the German war is over).

(3) Double summer time. I am a firm believer in single summer time in the summer for as along a period as the House of Commons decides. As to double-summer-time I recognise that a good many people like it while many others do not. I suggest to you that when the German war is over this too is a matter on which only Parliament (assisted no doubt by the Government) is really competent to come to a decision.

I trust that the Parliamentary recess has meant some relaxation if not a holiday for you.