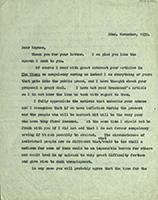 Carbon copy of a letter from F. W. Pethick-Lawrence to J. M. Keynes

Explains why he opposes the introduction of compulsory saving.

Thank you for your letter. I am glad you like the speech I sent to you.

Of course I read with great interest your articles in The Times on compulsory saving as indeed I do everything of yours that gets into the public press, and I have thought about your proposal a great deal. I have not read Greenwood’s article so I do not know the line he took with regard to them.

I fully appreciate the motives that underlie your scheme and I recognise that if we have inflation during the present war the people who will be hardest hit will be the very poor who have tiny fixed incomes. At the same time I should not be frank with you if I did not add that I do not favour compulsory saving if it can possibly be avoided. The cirsumstances† of individual people are so different that what would be too small a modicum for some of them would be an impossible burden for others and would lead in my opinion to very great difficulty for them and give rise to much unemployment.

In any case you will probably agree that the time for the adoption of any compulsory scheme has not yet arrived while there are still a million and a half industrial workers unemployed as well as large numbers of people in the middle classes who are not included in this figure.

I therefore for the present prefer to see voluntary saving going forward. If the time should ever come when this proves inadequate some scheme of compulsory saving may have to be adopted. But it seems to me that such a scheme would have to include much more drastic proposals even than yours to prevent persons with other means selling capital and so evading the effective control of spending that you wish to enforce. Would it not be necessary for instance to close the Stock Exchange and prohibit other forms of realising capital? These in turn would create fresh difficulties of their own.

With regard to your suggestion that you should come to discuss this with myself and others at the House of Commons some day in the middle of the week, I have not had an opportunity yet of mentioning this to my colleagues; but for my own part and I am sure for some of them, it would be a very interesting experience as you have always so much light to throw on economic problems.