Item 10 - Carbon copy of a letter from F. W. Pethick-Lawrence to Walter Nash 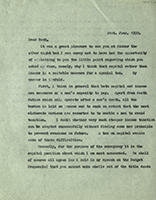 Carbon copy of a letter from F. W. Pethick-Lawrence to Walter Nash

Explains why he thinks capital a more suitable measure for a special tax than income.

It was a great pleasure to see you at dinner the other night but I was sorry not to have had the opportunity of explaining to you the little point regarding which you asked my view, namely, why I think that capital rather than income is a suitable measure for a special tax. My answer is twofold.

First, I think in general that both capital and income are measures of a man’s capacity to pay. Apart from death duties which only operate after a man’s death, all the burden is laid on income and to such an extent that the most elaborate devices are resorted to to enable a man to avoid taxation. I doubt whether very much steeper income taxation can be adopted successfully without finding some new principle to prevent evasions in future. A tax on capital avoids some of these difficulties.

Secondly, for the purpose of the emergency it is the capital position about which I am most concerned. We shall of course all agree (as I said in my speech on the Budget Proposals) that you cannot make shells out of the title deeds of wealth and you must depend on the margin of income over expenditure for the purpose. But this margin will be spread over the community in various proportions according to accidental circumstances. Whereas the people who ought ultimately to pay are the people of great wealth. This is reinforced by the fact that, in the case of the very rich, income tax, surtax (even without any allowance for insuring against death duties) already take a very large slice of income and it would not be physically possible to take much more. Whereas if the tax is regarded specifically as a tax on capital there is no reason whatever why in this emergency they should not be called upon to hand over part of their title deeds of wealth and so prevent a serious increase in the national debt.