Item 11 - Carbon copy of a letter from F. W. Pethick-Lawrence to Walter Nash 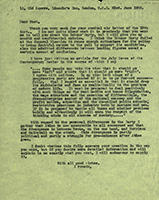 Carbon copy of a letter from F. W. Pethick-Lawrence to Walter Nash

Thank you very much for your cordial air letter of the 13th inst.,† I am not quite clear what it is precisely that you want me to tell you about the Labour Party, but I will give you my candid and confidential opinion. I think the Labour Party failed at the General Election to rouse enough enthusiasm for its policy to bring doubtful voters to the poll to support its candidates, also the admitted differences between leading figures sowed a certain amount of confusion.

“. . . . Some people may take the view that it should go more “left” and others that it should go more “right”. I agree with neither. In my view both wings of a progressive party are needed if it is to go forward successfully. What I regard as essential is that it should drop its shibboleths and face up realistically to the problems of modern life. It must be prepared to deal positively with such things as the rent muddle and house dilapidation, the wage structure and the question of differentials, the free-enterprise sector of the national economy and the profit motive, education and the so-called public schools, restrictive practices in industry both by masters and men. If it is prepared to tackle all these and similar problems boldly and effectively it will earn the respect of the thinking minds in all classes of society. . . . .”

With regard to the personal differences in the Party I gather that Attlee is now acceptable to all concerned and that the divergence is between Bevan, on the one hand, and Morrison and Gaitskell on the other. This divergence is partly political and partly a struggle for pre-eminence after Attlee goes.
I doubt whether this fully answers your question in the way you want, but if you desire more detailed information and will explain to me exactly what you want, I will endeavour to supply it.

With all good wishes,
I remain,
[blank]