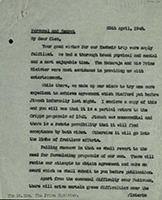 The Cabinet Mission have been refreshed by their stay in Kashmir. Encloses a copy of a proposal put before Jinnah, and gives an account of negotiations on the composition of an interim Government.

Your good wishes for our Kashmir trip were amply fulfilled. We had a thorough break physical and mental and a most enjoyable time. The Maharaja and his Prime Minister were most assiduous in providing us with entertainment.

While there, we made up our minds to try one more expedient to achieve agreement which Stafford put before Jinnah informally last night. I enclose a copy of this and you will see that it is a partial return to the Cripps proposals of 1942. Jinnah was noncommittal and there is a remote possibility that it will find acceptance by both sides. Otherwise it will go into the limbo of fruitless efforts.

Failing success in that we shall revert to the need for formulating proposals of our own. These will recite our attempts to obtain agreement and make an award which we shall submit to you before publication.

Apart from the communal difficulty over Pakistan, there will arise certain grave difficulties over the Interim Government which I feel it is important you should appreciate in advance. The first point is the composition of the Executive (communally and otherwise) on which I need not dilate. The second point is the quantum of power which the Executive will possess.

I have told Congress that in the interim period the existing constitution must remain. That is to say that constitutional safeguards will continue—the Viceroy’s discretionary powers and his power of veto and the Secretary of State’s overriding authority. The reaction of Maulana Azad (President of Congress) to this announcement was one of violent dissent. “Plenary power must be transferred immediately”. “The India Office must cease to exist forthwith”. “All contracts must be instantly transferred to the ministerial Government”.

I explained very politely to Azad (too politely the Viceroy told me afterwards) and later to Gandhi how unreal their attitude was. Not only must the Government of India operate under the existing constitution until it is changed by Parliament, but the vast machinery of Government of the India Office could not physically be transferred to a newly installed Government in India in a moment. I could not divest myself of my responsibility for the I. C. S. and others without a proper agreement. Other matters will also require adjustment etc. One of the functions of the Interim Government will be to reach a settlement for orderly transfer of powers at the proper time. I appeared to make no impression and I am convinced this matter is likely to be a serious bone of contention when the Pakistan issue is finally settled.

On the principle of the matter I do not see how we can possibly give way particularly if Jinnah does not come into the Executive or is in a minority on it for in such a case the Viceroy’s veto will be essential to protect Muslim interests in the interim period. But it may be that Congress would be willing to accept some comforting assurances regarding the use of the powers of the Viceroy and the Secretary of State. Stafford and I are disposed, when the time arrives, to consider carefully how far we can go to meet Congress susceptibilities in this matter. Alexander will probably not dissent from our view. The Viceroy appears to think that he can stand pat on an unequivocal refusal to budge an inch.

It is plain to me that if and when the Interim Executive comes into being (with or without any such assurances) the position of the Viceroy during the year or more of its existence will be one of extraordinary delicacy. He may be periodically threatened with the resignation of his ministers, and all the time the essential administration will have to be carried on.

P.S. Since the above was typed Nehru has told Stafford that there would not be the least chance of Congress agreeing to the enclosed proposal.