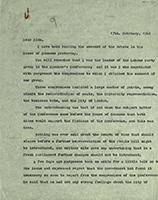 Margesson is disappointed that the compromises negotiated at the Speaker’s Conference have not been incorporated in the new Representation of the People Bill.

I have been reading the account of the debate in the House of Commons yesterday.

You will remember that I was the leader of the Labour Party group in the Speaker’s Conference; and that it was I who negotiated with Margesson the compromises to which I obtained the consent of our group.

These compromises included a large number of points, among others the redistribution of seats, the University representation, the business vote, and the City of London.

The understanding was that if and when the subject matter of the Conference came before the House of Commons that both sides would support the findings of the Conference, and this was done.

Nothing was ever said about the length of time that should elapse before a further Representation of the People Bill might be introuduced†, and neither side gave any undertaking that in a fresh Parliament further changes should not be introduced.

A few days ago Margesson took me aside for a little talk on the issue and expressed regret that the Government had found it necessary to depart from the compromises of the Conference. He said that he had not any strong feelings about the City of London but he did think that the University seats would have been allowed to stand. I said in reply that I did not consider that any breach of faith whatever was involved in the present Bill, and to this Margesson readily assented, but said that did not alter his feeling of regret that our compromise was so soon to be modified.

I think you will like to have this background though I do not suppose you will need to mention me at all. In any case my talk with Margesson was of course strictly private and confidential; but if you feel it necessary to say anything about me either by name or inference, you are quite at liberty to say that I have told you there was nothing said in the Conference or implied in the pourparlers between the two sides binding either party not to make further modifications in a later Parliament.

P.S. Since dictating the above in reply to “The Evening Standard” London Diarist gave him the substance of the 2nd half of the last paragraph.