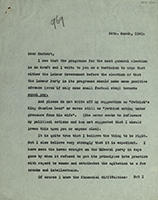 Urges that the Labour Party should make some advance before the election towards equal pay for women, and explains his motives for doing so.

I see that the programme for the next general election is in draft and I write to you as a tactician to urge that either the Labour Government before the election or that the Labour Party in its programme should make some positive advance (even if only some small factual step) towards equal pay.

And please do not write off my suggestion as “Pethick’s King Charles Head” or worse still as “Pethick acting under pressure from his wife”. (She never seeks to influence my political actions and has not suggested that I should press this upon you or anyone else).

It is quite true that I believe the thing to be right. But I also believe very strongly that it is expedient. I have seen the havoc wrought on the Liberal party in days gone by when it refused to put its principles into practice with regard to women and attributed the agitation to a few cranks and intellectuals.

Of course I know the financial difficulties. But I see and thinking women see that the said financial difficulties have not prevented many increases in men’s wages where they unjustly lagged behind the wages of other men similarly employed; and they think (rightly in my opinion) that what is sauce for the gander should also be sauce for the goose.

Anyhow many of them are getting hot and bothered about it and their influence will count when the time comes unless something is done. Even if it only be that enthusiastic labour supporters are turned luke warm it will be a serious loss to our party.

It will be a disaster if we allow conservatives and liberals to steel† a march on us in this matter.

Ever yours sincerely,
[blank]