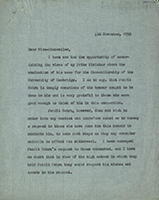 Advises him of Nehru’s decision not to become a candidate for the chancellorship of the University of Cambridge.

I have now had the opportunity of ascertaining the views of my Prime Minister about the nomination of his name for the Chancellorship of University of Cambridge. I am to say, that Pandit Nehru is deeply conscious of the honour sought to be done to him and is very grateful to those who were good enough to think of him in this connection.

Pandit Nehru, however, does not wish to enter into any contest and therefore asked me to convey a request to those who have done him this honour to nominate him, to take such steps as they may consider suitable to effect its withdrawal. I have conveyed Pandit Nehru’s request to those concerned, and I have no doubt that in view of the high esteem in which they hold Pandit Nehru they would respect his wishes and accede to his request.

The Prime Minister is most anxious that you and the members of the University should not feel that any discourtesy whatsoever either to the University or to its Senators is intended or implied in the decision which he has made.