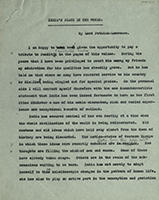 A tribute to Nehru, written for an unidentified volume.

(Carbon copy of a typed original, corrected by hand in pencil. Written some time after the assassination of Gandhi on 30 Jan. 1948.)

INDIA’S PLACE IN THE WORLD.
by Lord Pethick-Lawrence.

I am happy to be given the opportunity to pay a tribute to Pandit Jawaharlal Nehru in the pages of this volume. During the years that I have been privileged to count him among my friends my admiration for his qualities has steadily grown. But he has told me that where so many have rendered service to his country he dislikes being singled out for special praise. On the personal side I will content myself therefore with the one incontrovertible statement that India has been indeed fortunate to have as her first Prime Minister a man of his noble character, rich and varied experience and exceptional breadth of outlook.

India has secured control of her own destiny at a time when the whole civilisation of the world is being reincarnated. Old customs and old ideas which have held sway almost from the dawn of history are being discarded. The nation-states of Western Europe in which these ideas were recently embodied are fallen from their high estate. New thoughts are filling the minds of men and women. Some of these have already taken shape. Others are in the realm of the subconscious waiting to be born. India has not merely to adapt herself to these kaleidoscopic changes in the pattern of human life, she has also to play an active part in the conception and gestation of the civilisation that is to be. How important this part is will be realised when we descend from the general to the particular.

First, on the purely material plane, the world is being transformed by the new powers of mass production, radio, television, flight, radar and atomic fission. Every one of these is capable of being used to set men and women free from the sordid scramble for animal existence and enable them to develop to its full stature their physical, moral and spiritual being. But alternatively they may be abused so as to bring about the greater enslavement and degradation of the human race. Which shall it be? The voice of India will be an important factor in the decision.

Next come the recent biological discoveries including new means of eradicating disease in men plants and animals. It is even possible that we are on the eve of revolutionary changes in the whole matter of the growth & production of food. India has suffered grievously in the past from malnutrition and preventible ill health. The responsibility now rests upon her own scientists to find out the remedy and upon her statesmen to apply it.

The civilisation now passing away was founded upon inequality. Even upright and religious men and women seemed to see nothing wrong in a structure of society in which some people lived in luxury while others toiled unceasingly and remained in squalor and degradation. But Gandhiji was one of those who saw in this system an affront to human dignity; and he inveighed against it unceasingly by precept and example. At first the doctrine of communism in its pure form seemed to be the answer but in its application it has got entangled in power politics and totalitarian dictatorship. The new civilisation has to be founded upon human equality; and India in memory of her Mahatma and in accord with the generous impulses of her Prime Minister will wish to take a foremost place among the nations who are imbued with the new spirit.

In the realm of internal government India has astonished the world by her achievement. Even those of us who had the greatest faith in her statesmen scarcely dared to hope that she would be able to integrate the whole of her territory in so short a time and with such general approval. The highest praise is due to all those who have contributed to this remarkable result. It augurs well for the future stability of her State and provides a fine example to other nations.
What of the international outlook? Here I am convinced that India has a part of paramount importance to play. She occupies a pivotal place on the map of the world. She looks westward to Europe and the Atlantic Ocean, eastward to China to the Pacific and to the Americas, northward to the lands of the Soviet Union in Asia, South West to the varied races of Africa and South East to the new civilisation of Australia and New Zealand. So situated she cannot exist isolated and detached.

The world needs friendship and co-operation. It needs the mutual interchange of materials and ideas. Above all it needs peace. But peace like liberty requires eternal vigilance for its preservation. It requires the constant avoidance of the pairs of opposites—arrogance and cowardice, aggressiveness and subservience, self-sufficiency and undue dependence, anarchy and regimentation. A free and democratic India in close association with other likeminded free and democratic peoples can be a great bulwark of peace and of constructive fellowship in the community of nations.

Long may Panditji be spared to exercise his wise leadership in guiding the destinies of his country!