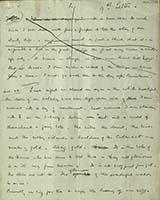 [The following paragraph has been cancelled:

Jan. 3. Where do the days go? It is more than a week since I sat down with pen & paper to tell the story of our daily life—& impressions crowd so fast & thick that it is impossible to live in the past, though the past may mean a week ago only—it seems as though we had never lived till Now! But at least I can make a record of the things we have seen & done. I must go back then to the day after Christmas.]

Dec. 26. Assuan. Last night we closed our eyes on the white moonlight. The doors of our balcony have been left open wide. I am wakened with a cry of excitement. Next moment I am standing with F on the balcony—looking out into a world of dreamland & fairy tale. The hills, the desert, the river and the rocky islands & boulders of the Cataract are made of gold—living gold. It is the robe of the Dawn who has come to tell that a Day all glorious is on its way from Heaven. It is not half past five yet. The others are out too. The glamour of the wonderful world is on us.

Presently we ring for tea & enjoy the luxury of our soft white ample beds, after the more merely utilitarian little camp beds of the tents. Then a walk before breakfast and at 9 o’clock, we start for Philae: Fred & Hetty do the grand, & drive off in state in a carriage & 4 white horses—with ‘Ali’ in the box—Marie & I with ‘Enani’ follow in humbler fashion on donkeys, who take us at a good gallop over the desert. We arrive almost together at the dismounting point, & we get a nice boat with a[n] awning to take us across the river—it is small enough to thread its way under the archways of the Temple, & between the pillars—& into all the little Courts—for the whole of the Temple is in the water now, since the great Dam has been made at Assuan. The men sing as they row to the accompaniment of the tom-tom. We are in no hurry to leave our little boat, so we put off landing until it is time for lunch—which is served to us on the flat roof of the Temple—by our new men—who produce the little cup of Turkish coffee afterwards which is the finishing touch to a meal. After some happy loitering in this, the most beautiful of ancient Temples, in the sunshine & shade (for this bright blue day is never one whit too warm) we take our boat again & row down to the Barage†—inspect this wonder of engineering, & then take another boat down the Cataract, back to the Hotel—in time to see the Sunset from the Verandah while we rest & have tea. Out again for a walk in the evening glow until time comes to dress for dinner.

Dec. 28. An amusing morning in the Bazaars—and Farewell to Assuan, where we have spent such a jolly time. Directly after lunch we embark in one of Cook’s post-steamers for a 24 hours journey back to Luxor. But oh, oh, oh, we are like spoilt children sent to school. In our Cabins are “Rules & Regulations”—notices stuck about everywhere—“It is strictly forbidden”. We are mere tourists now—to be “personally conducted” & allowed so many minutes to “do” this temple & that. We stop four times to see temples en route, are pursued with beggars—pestered with guides. We are thankful to leave it all behind at Luxor. We send Ali back to Camp with the luggage, & cross the river to Thebes with Enani—& spend the afternoon in the Temples of Sethos & Ramases—& call on the Quibells, some very nice people who give us tea. Back to our Camp for dinner.

Dec. 29. Up at 6 o’clock—& ride into Luxor with Fred to meet his sister Carrie & her friend who are arriving by one of Cook’s steamers. Back to the Camp for breakfast & then back to Luxor again. Carrie is going to join us & we are to have a whole day at Thebes. The earlier we get off the better, as we have a difficult road & no shelter from the sun. A long ride along a valley of barren desolation brings us to the Tombs of the Kings. There are 25 open to visitors—we visited only the three most interesting—the tomb of Sethos I, father of the Pharoah who began to persecute the Children of Israel, and of Ramses III—the Pharaoh who was not lost in the Red Sea—whose Mummy was discovered about 2 years ago {1}. These tombs have all the same construction, a descent into the rock, then a series of passages & chambers, the walls & ceiling covered with painting & inscription—at the end of all in the deepest & final chamber the sarcophagus. After lunch in a cave which forms the entrance of a blocked up tomb, and a long rest in the cool shadow listening to Enani telling stories, we climb a very steep path over the Libyan Mountains & descend into the next valley, where is the Temple of the Queen Hatases {2}. We crossed the river again in the sunset—are invited by C. to the Luxor Hotel to tea. Afterwards, Carrie & her friend come back to the Camp to dinner.

We bid farewell to Luxor—the Camp is packed up—after lunch—we have tea with C. at the Hotel—they see us off in the train. We have a comfortable night journey & arrive at Oasta at 5.30 the next morning, where we are met by a crowd of men, and can see in the dim shadow of morning eleven camels bulking black against the sky. A spot near the station is selected for a temporary camp—& breakfast is served, then things are packed up once more & we mount our dromedaries, the Camp is put on the baggage camels & off we go. It is nearly three hours before the belt of cultivated land has been traversed & the border of the great desert is reached.
We have our lunch served to us under the shadow of a little white mosque—while the men go forward & get the Camp ready. At last we are in the desert—it is around us like a great sea—pearly lights & purple shadows from the infinite of sand waves—all the purity of space! Now we know that at last we have begun to live & to be free. Three days have come & gone since then—three days & nights. Where have they gone? They represent one mood of absolute content & fulness of life. First there has come the sunrise & the early morning—then the early start—the ride, on the first day, to the Medum Pyramid, the oldest building in the world—the halt for lunch & a rest, the ride back to the Camp for tea—the walk into the sunset—the music & dancing & poetry of the bedouin arabs at night—on the second day the moving of the Camp on for 10 miles or so—the pitching on {3} the Camp again before sunset—& oh the new wonder that glorious sunset & the glory of the rosy earth & the gleaming [of] our white tents in the distance—as we turned to look. And this is to be our life for the next 17 days.

{1} This appears to be a mistake. The mummies of Sethos (Seti) I and Rameses III were among those in the cache at Deir el-Bahri discovered by Gaston Maspero in 1881, and were publicly unwrapped by him five years later.

{2} Reading uncertain. The queen is now usually known as Hatshepsut.