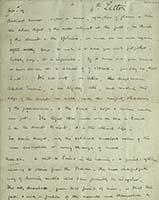 Radiant sunset, calm & serene, afterglow of flame & then the silver light of the moon almost at the full. We think of the desert & the Sphinx—we must see her once again. Here, to wish is to have your wish fulfilled. Nobody says—it is impossible. If it comes into your mind to have dinner at 6 instead of 7 o’clock—you say so, that is all! We set out, we three, the dragoman Abdul Enani, & our ‘big dog’ Ali, and reaching the edge of the desert we walk under the mighty shadows of the pyramids—& the sand is soft & warm under our feet. The light that never was on sea or land is on the desert tonight—it is the eternal life. No stories tonight, only the subdued musical voices of the men susceptible to every change of mood.

A visit to Cairo in the morning—a quiet afternoon listening to stories from the Koran—the most delightful way of learning arabic that can possibly be imagined. The only drawback, from that point of view, is that the face & voice & gestures of the narrator are themselves a study so fascinating as to make me at times quite oblivious to everything else—at the harrowing or exciting points of the story the words drop to a dramatic whisper or flash in rapid emphasis. This is one of the stories from the Koran. “The Lord said once to his servant the Prince Moses—“I do not like that black dog there; he has not a single white hair on him”. Then the Prince Moses sought to serve the Lord & he said—“I will kill this dog”. So he put a collar round his neck & led him away to the desert & there he tied him up, thinking that without food or drink he would surely die. After three days he went to see if the dog were dead. He found that a river of water ran beside him & fish leaped from the river into his mouth—and the dog was not dead—for he drank of the water of the river & ate of the fish in the river. Then Moses was astonished & said—“Lord, didst thou not say that thou likest not this black dog without one white hair”. And the Lord said—“It is true, oh Moses, that I like not this black dog without one white hair—but I have no wish to kill him”. Then Moses went to his home puzzled, for he understood not the way of the Lord.”

From stories we fall into conversation—of travel & different countries & customs. Enani could not believe that my husband had not paid any money for me! He wished he could get his wives so cheap. He had paid £200 each & they were both lazy & not even good looking! He has sent away the first & is going to send away the second & buy another. “If I came to live in England I would have six wives! English men must live very cheap—wives not cost them nothing!” “No Enani, if you came to England you could only have one wife.” “One wife! Only one wife!! No that is impossible. What does the English man do when he sees somebody he loves, prettier than his one wife?” It is strange to think what an utterly different conception of life these Arabs have. Not less moral! They never touch strong drink, they keep the fast of Ramadan most strictly—they pray devoutly several times a day—they have a code of honour which when once understood is no less sacred & binding than our own: but when I thought of telling our western stories to this Bedawin, I saw how impossible they would be. Grim’s fairy tales were the only ones I could think of.

Monday. Still in Cairo—my letters sent on to Ouasta! But a mail was due I knew & I sent a messenger into Cairo to wait & bring me back that day’s tidings from home. While he was away the right wind suddenly sprang up! We were in the middle of a story, at the most exciting point, when in dashed one of the crew—with the cry—“The wind”. In a moment all is bustle & noise—such a commotion—the great sail is hoisted to a chorus in which all the crew join—& the boat spreads its great wings & away we go—the most delicious motion in the world. Not only our boat, but all the boats large & small wake up & the river is full of life. One boat in front of us, turning broadside looks like a huge butterfly just pitching. We cannot go far as we have left two men behind & have to wait for them to pick us up. Presently after we have anchored for the night, they pick us up—bringing a goodly packet of letters—& we have some music & dancing from the crew, to celebrate the return of the wind.

Really one never gets a minute. Our curtains are all made now though & are put up—the flags are made—it is like setting up house! We get a little walk on the bank before starting—then the wind has dropped again. But about 1 o’clock, the chorus begins, the cries of Allah! Allah! and sails are set & once more we are flying before the wind. It is the most delicious movement in the world—free & swift, with no sense of limitation or friction—we pass groups of peasants—we see camels running against the skyline, here close at hand are the dates growing upon the palm trees—barks in full sail swish past us, laden with sacks or with cattle, & each with its group of squatting figures: the afternoon is all too short—the sun sets, the moon rises—and we moor again for the night. Dark craft in full sail creep up silently & pass on wrapt in the mystery of the night.

We begin our evening task. When the sun has set, Marie & I get into the little rowing boat & develop our Kodak films—a great disappointment tonight: a clean dozen films, not a mark on them—as the result of the day’s selection. What has happened? We cannot imagine. Better luck tomorrow.

After dinner Ali says—“I go a fishing”. He is dressed now in a short blue cotton petticoat, with legs bare from the knees—& he has his net & basket. Very strange is it, & very lovely in the stillness of the night, no sound but the soft lapping of the water & the swish of the net as it is thrown by the fisherman.

Another night of long delicious sleep—one is generally waked by the dawn, only to fall asleep again at once, until the full day has come. But oh how quickly the days fly by. It is Wednesday already—nearly one week out of our four on the Nile gone! No wind again—we go walking along the bank, Ali fishes again, we stop & talk with the charming little groups we meet. Sunshine, absolute well being, constant entertainment, perfect content—what can one want more. What a world, where the sun shines every day & the moon every night. Perhaps there will be another “holy man” presently to give us his blessing & bring the wind. That was the cause of the good luck the other day. We were lying moored to the bank, and he passed along—& wished us well. We gave him a coin & soon were sailing merrily.

In the afternoon we have visitors from the village & from the barges lying just ahead. Enani entertains them with stories on the bank—the picturesque groups arrange & rearrange themselves—now they are playing a game with squares marked in the sand & pebbles. Marie wants to understand—& “Ali” is only too happy to show her, & is very much impressed with the intelligence of the lady—an impression which is presently deepened & shared by all the crew when the lady takes an oar in the rowing boat! Books, letters, photo printing compete for one’s attention—but everything fares badly except “tea”. It is enough, to dream oneself into the centre of the life going on around & to pick up a few new words of arabic. However at sunset we develop our films again in the boat—& anxiously await the result. Every one of them splendid—a great success. The moon rises big & golden—we take the rowing boat & a lamp & row out on the river. On one of the barges some one is playing the flute. We row in & are greeted with smiles of welcome. The flute—oh yes we are welcome to that—it is nothing. With thanks for the gift & salaams we push off into the river again, & Enani takes the flute; which is simply a reed made of the sugar cane—& its long drawn out notes float back to our dahabiyeh—& are answered by tom-toms on the barges.

In the evening the circle of arabs on our lower deck is much larger—not only our own crew are gathered but visitors from the barges—& the music & dancing is very spirited—the long pipe of hashish is passed round, the tom-toms are passed from hand to hand to be heated by the wood fire, which thickens the atmosphere on the tented deck with curling smoke—the flute sounds like the Scotch bagpipes—the dandes are more & more wonderful—the dancers make themselves taller & shorter, the head held quite still, the muscles undulating like those of a snake. Then farewells are said & the visitors troop silently away. Marie & Hetty sit down on one of the sails on the upper deck to talk—after a little while they feel their seat move under them.—Horror! They have been sitting on the Captain who has already retired for the night!

And so here we go again before the wind, over dancing waves & this for the next three weeks will be our life—hour after hour & day after day the same yet not the same for two minutes together.

This day three weeks Fred will be coming—& we shall leave the boat & take to tents—but before then, there will be all the wonderful things between here & Luxor to see. Up to now, the study of Arabic has proved much more fascinating than hieroglyphs—and though it may shock erudite friends—the Egyptian sky & sunshine are better than the temples of the ages gone by—for they are older than all, yet vital—& divinity yet dwells in them & diffuses from them, and there is but one tense in the verb “To be”.

Southward! Southward! All the North behind—right into the heart of the noon sun—to the centre of light. Oh the joy of it—the delight! The sense of being unmoored at last! The sense of movement without friction, of life without limitation. Perhaps it is even so, when the soul passes the portals of death, leaves the gloom & the shadow & the cold which we call life, knowing nothing better & emerges into the God-lighted life radiating universe. But there is only one tense, I said. The sunbeams are dancing from the water ripples right into my heart. Greeting & love to all our dear ones. Think of us well & happier than words can tell. Joy be with you all.