East India House. Pleased to hear his sister is in no want of assistance, Mr Cowie to become a farmer

146 letters, most of them replies to invitations to dinner, with a few concerning arrangements to stay in rooms in College for the night, sent to the Master and Fellows of Trinity College, or specifically to Henry Montagu Butler, John Walton Capstick, Hugh McLeod Innes, or William Aldis Wright. An original letter of invitation may be found as part of item 65.

One letter appears to be personal, not Trinity College business: item 90, sent to John William Capstick by Georg Hermann Quincke 15 July 1896, who writes about electric currents, citing articles, and describing his overcrowded laboratory (in German).

G H Hardy: work on hypergeometric series and summation of series of powers of binomial coefficients

Article by C Størmer on Ramanujan published in Lördagsavien

Notes on Ramanujan and his work by G N Watson

displayed formulae for preparation as slides

Also includes minutes of the congratulatory meeting held in honour of Ramanujan and K Ananda Rao.

A farewell letter written immediately before his death: 'Dearest Ivor, It doesn't matter what you think of me. I know you love me -- the first friendship in my life & indestructable. So in lieu of goodbye & from my heart & soul God bless you & Gwladys & her daughter & give you great happiness. Erskine'.

Accompanied by a letter from Ivor Lloyd-Jones to Norman de Bruyne dated 27 June 1935 donating this letter and [his copy of 'The Riddle of the Sands'] to Trinity College Library, Cambridge.

Two illuminations done when Hardy was a child

Two drawings, "Ye crowning of ye Jarl Harold" showing Harold's coronation as depicted in the Bayeux Tapestry, and an illuminated manuscript page of the beginning of the Ten Commandments. Accompanied by an envelope which identifies these as illuminations done in childhood.

Letter from Isaac Barrow to the Fellows of Trinity College, Cambridge

Pera, Constant[ino]politanae - After an apology for the long delay in writing to the Fellowship, Barrow gives an account of his travels from Paris, with a description of his stay in Florence, prolonged because of the plague in Naples, which was predicted to spread to Rome whither he had planned to go next; heeding the warning that if caught by the plague he would not be able to leave, and it proving too difficult to reach Venice, he embarks on a ship to Constantinople. He describes the present state of affairs under the Grand Vizier, Koprulu Mehmed Pasha, who had come to power two years earlier: his work to restore the Ottoman name at home and abroad, recovering the islands of Tenedos and Lemnos, repelling an attack by the Venetian fleet, suppressing a revolt in Moldavia and Wallachia by removing their princes, repressing the infighting threatening the prestige of the empire, most recently undertaking an expedition to Transylvania on the pretext that Prince Ragotzy, a Turkish subject, had invaded Poland hoping to take the kingdom for himself. Barrow predicts that Christendom will find in the Grand Vizier its worst enemy and describes his punishment of Parthenius, the Patriarch of the Greek Church, who was accused of intrigue with the Duke of Muscovy despite the commonly held view that the accusations were false, and who was hanged and left on display in his Pontifical robes as a deterrent to plotters. Barrow closes with a promise to return to Cambridge within the year.

Anwoth, Jan Smuts Avenue, Parktown, Johannesburg.—Praises her letters. Comments on the books she mentions, and agrees with her remarks on Italian pictures. She and May are very happy.

Bloemfontein.—Agrees with her about the Suffragette Dinner. Has been quoted in the press, and is enjoying speaking to the South African people. Gives directions about her circular letters.

Lahore.—She and her husband are enjoying their holiday. They plan to see Lydia’s family in Alexandria again on the way back.

Trewartha.—Thanks her for her efforts during the election. Praises her judgment and her understanding attitude towards Lydia.

Fourways (Gomshall, Surrey).—May has gone to stay with Dorothy. Discusses the food shortage, the weather, and the garden. Is pleased that Lady Cripps is going to join Sir Stafford, and hopes that Pethick-Lawrence will be able to return with them. 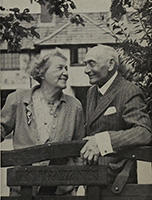