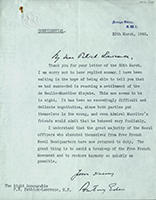 Foreign Office.—A settlement of the dispute between de Gaulle and Muselier is in sight (see 1/246). Most of the naval officers who absented themselves from the Free French Naval Headquarters have now returned to duty.

Thank you for your letter of the 20th March. I am sorry not to have replied sooner. I have been waiting in the hope of being able to tell you that we had succeeded in reaching a settlement of the de Gaulle–Muselier dispute. This now seems to be in sight. It has been an exceedingly difficult and delicate negotiation, since both parties put themselves in the wrong, and even Admiral Muselier’s friends would admit that he behaved very foolishly.

I understand that the great majority of the Naval officers who absented themselves from Free French Naval Headquarters have now returned to duty. The great thing is to avoid a break-up of the Free French Movement and to restore harmony as quickly as possible.