Item 36a - Letter from Christabel Pankhurst to Emmeline Pethick-Lawrence 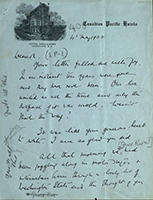 Hotel Vancouver, Vancouver, British Columbia.—Was delighted to receive her letter. Discusses her travels, the improvement in her state of mind, and her belief that the end of the world is imminent.

Dearest,
Your letter filled me with joy. In an instant ten years were gone and they have never been. Our love united us all the time and only the surface of it was moved. Wasn’t that the way?

It was like your generous heart to write. I am so glad you did.

All that morning we {1} had been joggling along in motor stages & interurban train through a lovely bit of Washington State and the thought of you and Godfather and our wonderful years of work together came to me so strongly and remained with me & for a long time I talked to Grace of it for my thought would have expression. Then we arrived at Bellingham & when I entered the hotel a letter was put into my hand. I knew the writing at once! I can only say again with what joy I read it[.] Something just slipped into its place and I felt comforted.

The envelope was so frayed and covered with hotel redirections. I realised that it might so easily have been lost and that I might then never have known, or not for very long, that you had written it! All the more must I let you know by telegram safely and at once that I had the dear letter & that my heart met yours in all you said.

How I wish I could be in your arms & have a long long satisfying talk about all the essentials as you put it—with the past all union between us & our eyes looking forward!

Still I cannot regret being over here and I knew when I sent my further message how likely it was that you could not come now. All the same the exchange of messages gives us the little human feeling of each other—and I look forward to your letter. I expect to remain in these parts during the time that it will take the letter to arrive.

As I write, I look out from a high window of this hotel on to the lovely lakelike sea & the mountains that come so near that one can really see & know their faces. Vancouver is one of those places, here & there in the world, that one can live in if one had to. But I like to wander in these times. Every geographical displacement has helped me along another journey I am making.

Yes! I have had great experiences, inward rather than outward,—and I was unhappy. Perhaps there was, as you said, something of a penalty about it, though it seemed difficult at the time to understand the need of price and penalty after the event—one is inclined to expect that the price will come before & not after—& then to be taken by surprise & be a bit rebellious at heart—or perhaps only stupid & not see that it is the price which one would so gladly pay understand[in]g it to be such!

But that is all done with now & I am thankful to have learned many lessons & to have won my way to a real freedom of spirit that I never knew before.

I had so very much to learn. I depended too much upon humanity—upon myself & other people. One has to find the bed-rock. And these turning points in one’s life always & only come after a time of inward stress. Rebirth is painful—that is the fact!

I am absorbed in viewing the great world situation and mighty developments of this time.

It is the End of the Age! The ends of the ages are certainly come upon us & in our very own day one great period of Eternity ends & another begins. This is true, I believe, in no merely figurative sense, but in very literal truth.

At a certain point in the War, I saw as in a flash that humanity has come to the end of its own political resources & that humanly speaking we are moving in a vicious circle. We are powerless to work out the Salvation of Society & of the world. We have neither the wisdom nor the goodness to do it. Every day that I have lived since then has confirmed me in that conviction.

The recent war was the first rumbling of the storm that ends the old order and ushers in that new order in which “the Kingdoms of this world” will “become the Kingdoms of the Lord & of His Christ & he shall reign for ever”.

I have come to this conclusion, in my hard headed, “logical” way, that the Incarnation of two thousand years ago is soon to be repeated in another manner & in terms of “power & glory”. I have reasoned it out from every standpoint, comparing Scripture with scripture, and written prophecy with its actual fulfilment in historic event in past time & in our own day, & viewing the evidence as a lawyer would I am convinced that Jesus Christ will come again and that soon.

By the way, every third Tuesday in the month there is in the Kingsway Hall London what they call an Astral Testimony Meeting which has three sessions, morning, afternoon and evening, at which the Clergy of various denominations & also some laymen discourse on this question. I went once when I was in London.

It is a wonderful privilege to have understanding—a light that shows one the meaning of the world’s condition at the present time.

It seems to me that the true link of union between human beings at the present time is that between those “who love His appearing”.
It was just by chance—yet not by chance surely—that, in the war days, I found in a bookshop a book by Dr Grattan Guiness “The approach[in]g End of the Age”. That set me thinking, though hardly daring to believe so grand a news—but since then I have read & thought steadily & am more & more deeply convinced.

I know you will want to know my though about the world’s outlook & need, as the telegram expressed it—for it was always on that plane that we met & worked together.

Dear Godfather! give him a big message from me.

With all my love[,] your same
Christabel

More another time about people & things over here.