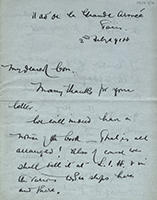 11 Avenue de la Grande Armée, Paris.—The WSPU will review and sell Lady Constance’s book (Prison and Prisoners). Emphasises the need for the WSPU to remain independent and points out the tendency of other organisations to draw on the energies of its supporters.

Many thanks for your letter.

We will indeed have a notice of the book {1}—That is all arranged! Also of course we shall sell sell it at L.I.H. {2} & in the various WSPU shops here and there.

How glad you will be when the book is really out!

I wonder if you noticed in the Suffragette an article on Inner Policy. That gives you the key to much tht you may have heard and seen.

The Union has passed through difficult seas during the past two years and more and more difficult will our course become.

Your pilot may puzzle you often, but there is a chart believe me and we work & steer by that.

In one’s personal life there is I am sure you have felt an essential something to be guarded against the World’s assaults and endeavours to make one other than oneself. So it is with a Union. The WSPU if it is to complete the work it has begun must conserve its character & independence & peculiar virtue. Politically it must remain uninfluenced in the slightest degree by the Govt & the Liberal Party. The people who have guided it must guide it to the end using their best & therefore free judgment—so many people are ready to advise & “control” even at a certain point!!

These principles dictate our actions always.

Another point—there is too great a tendency upon the part of other organisations new & old to draw upon the energies of W.S.P.U. supporters. Concentration is the watchword for us! There are other women in plenty for the other organisations. The W.S.P.U. people shd not divide their energies.

All these sayings lead me to this point tht it is better for Mrs M’Leod who is a pillar of the V for W Fellowship to serve tht individedly.

I feel this particularly strongly in this case, because she was one who at the time of the separation had not faith and was really difficult. She will be I am sure more contented in the long run if she concentrates on her own society.

This letter is for your eye alone.

They will be seeing Mrs M’Leod & arranging matters.

How I should like a talk with you! In the meantime I may assure you that the inner policy as it is called has behind it all the conviction & prompting tht were & now are behind the militant policy itself!

We have come to a point at which a Union otherwise conducted wd succumb to the influence & indirect attack of the enemy. It is the hardest time for us who bear the responsibility for sometimes we have to seem unkind to former friends. That is worse than having to fight the Govt! With love

The word ‘that’ is abbreviated four times as ‘tht’. Full stops have been supplied at the end of two sentences.

{2} Lincoln’s Inn House, the headquarters of the Women’s Social and Political Union.