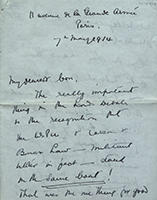 The really important thing in the Lords Debate is the recognition that the WSPU & Carson & Bonar Law—Militant Ulster in fact—stand in the same boat!

That was the one thing for good that really counted in a practical sense.

On the other hand there is the Liberal cry that one knew would be raised tht “the rejection of Lord Selborne’s Bill by the House of Lords illustrates the profound anti-feminism of the Unionist Party”[.] See leading article from “Daily Chronicle” enclosed.

It seems to me tht the matter having been brought to the present point, it cannot rest there. What next do Suffragists in the House of Lords intend to do! The Archbishop of Canterbury[,] the Bishop of London & Lord Lytton could get us the vote now if they cared to do it. But of course Lord Lytton does not agree with the Bishop of London about Ulster & ourselves.

How can they as suffragists—as men—allow the coercion & persecution of women to go on while concession is being made to Ulster men whose militancy means bloodshed & the death of hundreds if not thousands of human beings.

Have you heard that Mrs Drummond and Mrs Dacre Fox have both been summoned to appear at Bow St on account of “inciting” speeches?

This means illness & suffering—sheer torture for both of them. And there are Carson & Bonar Law & all the rest, free & unharmed!

Mrs Dacre Fox is expected at Bow Street on 14th May—a Thursday. The General threw her summons away & so we don’t know the date named in it.

The Government are trying to silence our powerful speakers. They will probably arrest several organisers—But there are always people ready to step into the breach[;] surely the last two Raids have taught them that.

We laugh at their Raids except for the pain & danger they mean to the ones taken.

Let us hold fast to tht admission tht women’s militancy & Ulster militancy are in their truth & essence one & the same & shd be dealt with in the same way! What are these men going to do!

Thank goodness we can win without them anyhow—by the sheer fact of being able to create an intolerable situation! Women winning their own freedom. Glorious thought!

My very best love to you.
Christabel Pankhurst

The word ‘that’ is abbreviated a few times as ‘tht’.