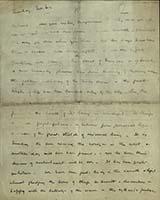 (Place of writing not indicated.)—Describes her voyage to Egypt.

Beloved. Are your wishes, magicians? Why did you not tell me before you had this power to make smooth & radiant the way for those whom you love. All the days have been blue & serene—with lovely light, & all the nights sparkling with stars. The scent of Mimosa or of sweeter & more heavenly flowers has come morning by morning across the golden pathway of the risen sun & the great circle of life has been bounded only by the sky. Yes, the sea is wonderful, & to live in its breast & to feel the pulse & the breath of its being is wonderful. It brings a great forgetfulness—a release from personal life, a sense of the great stretch of universal being. It is Sunday, the sun nearing the horizon in the west, & another day will soon have passed—& all too soon this dream of contentment will be over. It has been quite unbroken. We have been just living in the warmth & light, almost grudging the hours of sleep, so sweet & dreamless & happy with the lullaby of the waves & the rythmic† pulse of the great heart whose throbbing speeds us on. We have been quiet, partly because the passengers are a somewhat sober lot, but perhaps because we have not gone out of our way to know people—there seems hardly time, for we shall be in port on Tuesday. They are not attractive, & oh so sordidly clothed; the women I mean. Motley flannel blouses on dark nondescript skirts, regardless of any sort of colour harmony—not one speck of brilliant beautiful colour—except in the lascar sailors! their scarlet caps & blue linen tunics are quite a relief. Mine is the only white suit, I have been so glad of it, I put it on the first thing & have worn nothing else except in the evening—& Marie & I have flaunted our orange & crimson scarves! The ‘officier’ I told you about {1} who came & sat down by us at breakfast turned out to be the Captain—he is such a nice man—an Irishman—I like him very much—he read prayers this morning. Last night at 11 o’clock we passed Stromboli & from its peak, red flames darted up to the stars at intervals. So you see we were not without our 5th of November fireworks.

At 2 o’clock this morning I woke with that fresh alertness, one owes to perfect sleep; & looked through my port hole, & saw that we were going through the Straits of Messina—we were very near; the mountains of Italy (at least the coast-line looked mountainous in the starlight) rose up against the sky like a land of imagination & dreams.

I said this morning I should like to take a picture of Marie in her berth in the morning, with the sparkle of delight in her eyes—looking in her excitement quite pretty. She & Hetty are very happy & we are all splendidly well, with great hunger! This is certainly a voyage “made easy for young beginners”. I must not expect that it will be always like this—must I?

The time that could be spared from the sea, & perhaps more time than ought to have been spared, has been given to my most fascinating book—“The Garden of Allah” {2}. You ought to bring it for the voyage. I don’t know whether you will get on with it; you will find the same physcholigal† detail that tried your patience rather in Felix {3}—but if you once get through that, I think you would get absorbed. I think it is quite one of those books that may be called “a miracle”. To me, it is quite superhuman, in truth & power & charm. Sentence by sentence it is a delight; one reads the very words again & again from sheer delight in them.

Never in my life have I known quite this sense so continued, of being lulled body & soul: laid to sleep in the arms of a great motherhood, as perhaps in the days before the memory was awake—so satisfied, as you say, it is “an eternity”, for “time” is not, nor past, nor future—only the song of the sea & the song of life. It is almost as if one had passed out of the body—I mean at times, when one sits hour after hour in the dark loath to stir or break the spell. I think of all I have left as if they belonged to another life—and of you as if you were coming coming† to me from the other side. We get a long evening—for we go down to dinner at 6 o’clock, as there was no room for us at the ordinary dinner at 7.30. It suits us well—we have the deck to ourselves from 7 o’clock till 9—it is par excellence the hour for dreams.

I heard some people talking today who have a very wretched cabin. “And we booked in June” they said. They are going to New Zealand & are hoping to change & get better berths at Port Said! How lucky we are! If we were on the other side of the boat, we should be very hot: but we could wish for nothing better in any way. We have no “places” except for dinner; breakfast & lunch are served during certain hours, & one just sits down where there is room. This means a new neighbour every time & rather tells against making friends. Some sports are arranged for tomorrow. But for such a very short voyage one wants nothing but—heaven!

I think of you & Carry tonight at The Sundial. How I hope you are having a good time & a ‘real’ time together. And dear Podger! You will have got my letter from Marseilles I hope. I keep thinking that you will be just where I am now in 5 weeks time. I could sail round & round the world for ever & aye, if the sea were always as it is now, & if you were always coming in 5 weeks’ time! I was so glad to get your dear telegram, it just came as if to say that you had prepared & made all this glory—& your darling letter—there never was such a fellerie† as you! Oh I want you to have all this rest & cessation, that we are having now & afterwards out there, an awakening, a revelation—the baptism of heavenly fire from the lands of the ardent sun.
Do you remember Swinburne’s lines from his Songs before Sunrise—

Out, under the moon & stars!
Out under the ardent sun!
Whose light, on prison bars
And mountain heads, is one.
Our march is everlasting, till time’s march is done! {4}

All too soon is our voyage coming to an end. Presently there will be packing—money-changing, bustle & then a train journey of 4 or 5 hours—landing us in Cairo about midnight. This part of the journey has been “bliss”, may the next part, as Marie says, not be “blister”! No—the fascination of Egypt together with a kind of awe & terror, the awe of the unknown & yet the near—grows upon one. Surely, surely the desert out there holds some gift for me & for you! How one longs for the power of song. At night in the dark looking out from the deck, I have thought what it would be to be able to sing, like the nightingale in Summer nights—it seems unnatural to be so dumb. In the life to come, there will be new powers of expression given to the soul. I begin to understand the conception of “Nirvana”. The wonderful East! One begins to——

Well, well, enough! There is a Burmese gentleman on board; he has been teaching us a little Arabic, & has given us his card—so that if we ever go to Burmah——

Where shall we not go? Oh Schatz what will be the end? Hetty was telling me wonderful things today out of a book called “The Dawn of Astronomy” by Sir Norman Lockyer—these old temples were so built that on one day of the year, the sun or the star in whose honour they were built shines right in to the inner shrine—the Holy of Holies. You could get it out of Mudie’s {5}—wouldn’t it be rather a lovely book for the journey.

But I expect you will not have much time for reading. We went in for the Sports yesterday—but did not get any prizes. I expect you will come to me laden with trophies. I am afraid we rather grudged the time! I want you to bring me Swinburne’s “Songs before Sunrise”, if you will—it will set me in tune for Mazzini: they are all inspired by Mazzini & the awakening of Italy.

I promised to lend Mac. my fiddle. It is at The Mascotte. Next time you go to Holmwood will you bring it back. I want you here now. Beloved, dearest, dearest, I am ever yours, ever yours, your Woman.

P.S. I am sending you the first two sheets of my Journal {6, which I want you to circulate please. Marie said when she saw me writing to you, “What a waste it seems, all that for one man!!” She is developing into quite a ‘rascal’.

You might let Mary Neal see this Journal before fo[r]warding to Mother.

{1} Presumably in the letter from Marseilles referred to later in this letter, which is not extant.

{4} A slight misquotation from Swinburne’s poem ‘A Marching Song’, from the collection Songs before Sunrise (1871), dedicated to Giuseppe Mazzini, who is referred to later in this letter. The published words are as follows:—

“Out under moon and stars
And shafts of the urgent sun
Whose face on prison-bars
And mountain-heads is one,
Our march is everlasting till time’s march be done.”