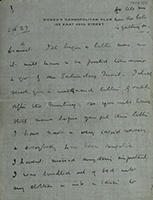 Women’s Cosmopolitan Club, 133 East 40th Street (New York).—Has given a speech at Miss Wald’s settlement and prepared her speech for Friday. Christabel Pankhurst’s meeting was not a success. Discusses plans for her tour.

Dearest. I’ll begin a letter now, as it will have to be posted tomorrow to go by the Saturday Mail. I shall send you a week-end letter by cable after the Meeting: so you will have that news before you get this letter. I have made a very rapid recovery & everybody has been angelic[.] I havent missed anything important[.] I was bundled out of bed into my clothes & into a taxi to attend a Dinner & Reception afterwards at Miss Wald’s Settlement on Tuesday night—put on a bed in a dark room between the events—made my speech with which everybody expressed themselves delighted & bundled back into a taxi before the people left their chairs. Yesterday Mrs Blatch’s Dinner in my honour was postponed till next week—& I had a quiet day in my room to save my throat for Friday. My temp: was still nearly 100 yesterday. This morning I felt much better & got up & went downstairs to breakfast. For I must harden up a bit for Friday. My temperature is now normal & I feel I need fresh air & exercise. I have been so frightfully much drugged with aspirin & pyramidon to bring down temperature, that I feel dazed & numbed—& I must get back to more normal conditions[.] I have written out my speech & a typist is making 20 copies of it—& I shall send you one. If you like to abridge it or publish it as it stands, you can (but I dont see any occasion)[.] “Votes” is too small now for the reproduction of speeches—& for a pamphlet we have no audience unless one develops in the meanwhile. The Harbens might like to see it—and some of my friends including Mary Neal & Doctor Chapman & Elizabeth Robins. I have not at present had any new light upon the war from the American Papers. All the opinion I have read, or encountered is on the side of the Allies. If there is any German sympathy it is lying low[.] Nothing illuminating! But remember all I have seen of New York is three days inside my bedroom.

The weather has been perfectly lovely the whole time—clear & blue with brightest sunshine.

My friends here are very warmly reminiscent of you. Miss Wald (the Jane Addams of New York) in introducing me on Tuesday night spoke your name saying you were honoured & admired over here with deepest recognition of the stand you have taken & the work you have done.

I hear on all sides of disappointment in C.P.’s meeting on Saturday. Alice Wright didnt go—the Lewisohns came out in the middle. Mrs Blatch says the tickets were pressed upon people, she was given a box & entreated to come—& all her friends who were there tell her the same story. The Hall was only half full. The only thing that saved C.P. from acknowledged failure ws the mercy of the reporters whom she captivated. They all described her as a lovely young girl of twenty three!—a marvel for her age!

Have just been out for a short walk up along 5th Avenue to Broadway & back. The Club gives on Lexington Avenue on one side, the entrance being in East 40th St. Its the nicest place, (barring Clements Inn & The Mascot) in which I have ever stayed. Both S. & I have a bathroom & dressing room as well as a bed-sitting room to ourselves—& the appointments, & facilities are absolutely perfect.

I am booked up with a delightful programme ahead—though a very easy one. But I will tell you of these events as they come off. I am not able to tell you of any fixtures outside New York yet—there have been many “nibbles”—but I think things are hanging fire until after Friday. Everybody of course wants to get me for nothing & our previous correspondence in connection with our tour is rather embarrassing. People write & say “you said you would be willing to help a Suffrage Society”[.] November is a frightfully awkward month as I told you—& C.P. & A.K are a complication because they are ready to go anywhere for their expenses & hospitality. Feakins still thinks if I could give him time, he could get me a fine tour—but he is being cut into every way by the present concatenation of circumstances—& I have not promised him December. I do want to know if you would be very grieved if I did send you a cable later, to say I should like to stay on over Christmas. I may never feel the least inclined to do it but you cant say anything in a cable when you do send it—that is why I want to know before the possibility crops up, what your feelings on the matter are. Its much too early to form any judgment yet—but if my speech does catch on—& I think you will consider it a speech that might catch on—opportunity might occur to go further & further West—possibly to the Coast even. Friends & hospitality I should find everywhere[.] People are overwhelmingly hospitable & warm. Dont say anything about this to anybody else please[,] as the suggestion might not crop up at all.

If you want to know what I feel—well—frankly I should like it immensely. I find that you need not work any harder than you choose[—]you have only to say what you want & what you dont want. Its “play” to me after the W.S.P.U & compared to Emergency Corps. And I want to know much more of the people who interest me enormously.

There is nothing to bring me back to England except you. So if you will either join me or be happy & content without me, I shall feel free if it ever comes to a choice!

Susan had her letters brought on in the Franconia by arranging with the Purser, she hasnt got them yet, & I dont think the boat has arrived. I have not yet received any English mail. Love to all friends. A hug for my old Sweetheart. Ever your own