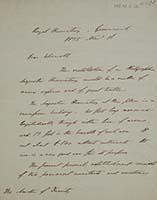 Royal Observatory Greenwich - The installation of a Photographic Magnetic Observatory at Cambridge 'would be a matter of serious expence and of great trouble'. The Magnetic Observatory at Greenwich 'cost about £500 without instruments. Its use is very good for its purpose'. GA gives a break-down of the personnel costs at Greenwich. He does not think that a magnetic observatory at Cambridge 'would very probably give a single leading idea on this mysterious subject...As regards the results obtained at one isolated place, it is not likely that any could be obtained differing generally in character from those obtained at Greenwich, and there, as you correctly remark, have led to nothing yet. And I cannot conceive that there would be any advantage in adding to the accumulation of existing unproductive observations'. Besides which Cambridge is too near to Greenwich to compare observations, if the proposed observatory was somewhere like Rio Janeiro, GA would look upon the project favourably. Further if there was a Cambridge mathematician deeply engaged in theories of terrestrial magnetism, with the physico-mathematical power of Professor Stokes, 'it might be a sufficient justification of the expence of an observatory that he would have its results ready to his hand'.