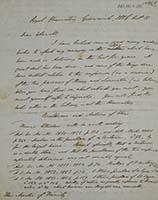 Royal Observatory Greenwich - GA gives a list of references pertinent to 'the steps which have been made in Astronomy in the last few years. A great deal has been done, and some of the things done have distinct relation to the comparison (as a science) of the two processes of theory and observation (as labours)'. GA places his list under the following titles - 1. Parallaxes and Motions of Stars: 2. Orbits of Double Stars: 3. Sun's Heat: 4. Attractions generally: 5. Lunar Theory: 6. Planetary Theory: 7. Encke's Comet: 8. Cometary Theory generally: 9. Shooting Stars: 10. Miscellaneous.