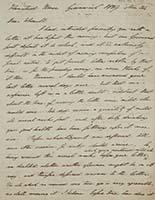 Flamsteed House, Greenwich - Thanks WW for the ale [see GA to WW, 10 October 1839]: 'we shall consume it I believe before time has done it justice'. GA has not seen WW's lecture to the Philosophical Society on tides: 'I should much like to see it; and shall be glad if you can send it to me. I have not duly consulted Herschel, but I remember his general notions about forced oscillations and so far in application to tides they must agree with mine. By the bye, my correlative terms are forced tide wave and free tide wave. In the simplest cases which can be conceived, the two are mixed together so as to produce phenomena that, viewed as observations from which empirical laws are to be deduced must appear inextricably confused. In one case only, namely when a limited space is very small, the tide becomes a simple tilt, like that of water in a basin. This cannot be the case in a sea so large and (comparatively) shallow as the Pacific, but upon one supposition one of the waves there may predominate, and there may be phenomena something like Fitzroy's. But I should like to see what you have said'.