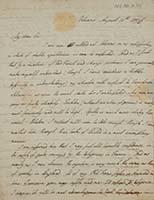 Orleans - GA and his students are settled in Orleans and 'in as satisfactory a state of stable equilibrium as can be expected'. If his paper in the Philosophical Transactions has been published could WW send him 70 copies. Could WW tell [Henry] Kater 'that I have investigated a theory of the pendulum...as he suggested to me: and that the interval to reappearance does not follow so simple a law as he seemed to imagine?' And if he sees Young, that further to his letter addressed to GA in the Quarterly Journal, 'I get a different result? The result however consolidates his influence. The problem is, to find the form of a thin revolving fluid surrounding a nucleus'.