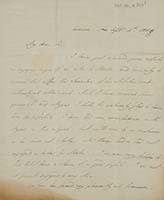 Orleans - GA has not heard from John Herschel and is not sure whether he has reached Paris yet - perhaps he is with Arago? Could WW send the GA's papers to his forthcoming address in Paris [see GA to WW, 10 August 1826]. [Henry] Kater was perfectly satisfied with the correction of Lambton's error: 'moreover I discussed with him most vehemently the question of disappearance and reappearances versus disappearances only and persuaded him at least to confess that the disappearances only would not give a right result except all circumstances such as the rate of the pendulum on the clock, the arcs of the two pendulums, and the magnitudes of the discs, were the same. He hoped that in giving an account to the Royal Society we should not spare Parkinson'. GA outlines the part of the account he is to contribute. He is 'thinking of means to make chronometers transportable in a kibble & various other things, and will bring you a complete plan for conducting the operations. Of course I shall not do anything till I have seen you'.