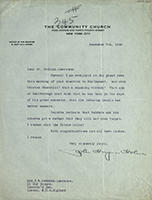 The Community Church, Park Avenue and Thirty-Fourth Street, New York City.—Congratulates him on his election victory over Winston Churchill.

Hurrah! I am overjoyed at the great news this morning of your election to Parliament. And over Winston Churchill! What a smashing victory! That son of Marlborough must wish that he was back in the days of his great ancestor, when the laboring people had better manners.

Reports indicate that Baldwin and his cohorts got a defeat that they will not soon forget. I wonder what the future holds?

With congratulations and all best wishes, I remain