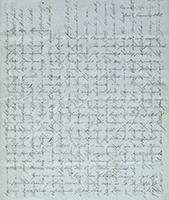 Newark.—Is sorry he was away when Lawrence was at Birmingham. Discusses his work on the Newark bridge and his relations with his colleagues, and refers to his travels around the country. Asks how Lawrence is getting on with his factory. The masters were unwise to close their works in response to the strike.

Your letter from Chester dated the 21st only reached me this morning, what a pity you should go to Birmingham and find me absent, doubtless you have felt somewhat disappointed.—I have been quite out of temper abt it all day.—Spiers was more fortunate in his visit to me here, & we spent a very pleasant evening together talking upon all sorts of subjects interspersed by a sprinkling of scandal of all our Friends & one or two in particular their doings & their folly!—I wish you had come on here and spent the Sunday {1} with me, that would have been your proper course of action & to say the truth when I heard a double knock just now & somebody ask if Mr. Phillips was at home, I half expected to see you walk in,—but it was only the resident Engineer of the Gt Northern line who came to ask me to dine with him tomorrow, & so my hopes of seeing you & my chance of getting my respected Umbrella back (an article of wh I am greatly in want of here) were completely crushed.—N’importe, I’ll make amends some other day at the present moment my feelings will not allow me to say more upon such a tender subject.

You are aware I have been fortunate enough to get the superintendance of this Newark Bridge and as it is of 260 ft span & contains upwards of 600 Tons of Iron it may be considered rather a crack job to have. Hitherto I have had the whole management of it at the Works, & here have been engaged in preparing the scaffolding & staging across the river for it to be erected upon, & which I can assure you is no little matter.

Pile driving at the best of times is not very delightful work but in the midst of Winter with such weather as we have had it has been really arduous. Snow, Wind, Rain & floods have all combined to hinder our progress so that, between the one & the other & the hostility of all the Bargemen navigating the river I have had enough to do, indeed Lawrence,—the cold blooded brutality of those Bargemen have nearly at times maddened me, the contempt they express for my person & for all them damned Railway people who stop an honest Man getting his livelihood, as they inform me all railway people do, is dreadful, & the most courteous salutation as they pass is to consign us all to the devil.—One morning I had 3 Piles, ea one representing a days Work for a gang of 8 Men completely shattered to atoms by a vessel either on purpose or by clumsyness, & to hear the fiendish shouts of laughter which burst forth from the crew as the vessel came smashing & crashing amongst our piles would have made yr heart ache Lawrence, as for me I have been for the last 2 Weeks quite hoarse with shouting & stiff in every limb from making frantic gestures indicative of my displeasure, at their obstinate conduct. I summoned a whole gang of them & got two fired & now am allowed to proceed in peace, but of course this measure has raised the hostility of the Trent Navigation Cy., before whom these Bargemen tell of their injuries, & I am threatened by the board with no end of damages for obstructing, during several days the navigation of the River, there are 6 sheets of Foolscap full of it, but I have not even looked into & don’t intend.—

These are my difficulties here, & then although this Bridge has been dawdling for months when our firm wished it pushed on, the Company have suddenly found out it is the only thing which delays the opening of the line thro,—& so Cubitt keeps bullying our people & they transmit his letters with sundry additions continually to me, & always requesting a very full report of the whole state of the Work by return of post.—

The last 3 days it has been blowing a perfect Gale & today is accompanied by torrents of rain so that [it] {2} is impossible to work; owing to the floods & the rapid stream caused thereby the rafts on wh are the Pile Engines are always under water at the best of times, the worst of the work is however not done & on Tuesday I expect to return to Birmingham for abt 10 days to superintend the proving of the Span of the Bridge now erected at the Works, & at which no end of Engineers are to be present.—Joseph Cubitt the Engineer of the line I like very much I have seen a good deal of him, as I conducted all the previous Experiments at the Works, both he & Fox always shake hands with me, wh although nothing abstractedly considered, is more pleasant than being snubbed, as I have upon some occasions felt myself by certain parties, nameless.—I fear you will think me very egotistical but really I have nothing but myself & my Work to talk of. I have not met an adventure for Months a very striking Circumstance & particularly denoting the absence of all female attractions &c in this part,—for the bye I did fall in love at Hull abt 6 Weeks ago, but it [was] {3} so long ago I had forgotten it. I did pay another visit there last Week but my inamorata {4} was not at home,—perhaps You may know the people The Messs Wade, Timber Merchants of Hull. I have bought all the Timber for this Bridge of them & went there to select it & agree abt the price, & whilst with them they entertained me with true Yorkshire hospitality, & one of the daughters is sweetly pretty.—

This Newark during the Winter is a wretched hole unless one has time & money for shooting, hunting, & visiting but the Town itself is remarkably slow, there are only 3 good things in the place, the Inn, the Church, & the library & newspaper room,—at the first of these I was so comfortable I stopped a fortnight, & the second I visited once, last Sunday, & the third I generally look into ea day,—as I am made an honorary member during my stay here,—which speaks more for the good sense of the inhabitants of the place than any other argument I could adduce.—

I like Lincoln very much, all Cathedral Towns have an air of respectability abt them, wh most Manufacturing towns are in in† want of, there are too lots of pretty girls & some little fun usually going on. The Gt Northern Hotel you will find, one of the best Houses in the Kingdom—& well appointed.—You do not tell me whether you have seen anything of Chester. I have always heard it spoken of as such a romantic old place that I have quite a desire to see it. Albert Smith I think speaks of it in one of his Works.—

How do you get on with your Factory? & are you fully at work?—all this I suppose you meant to form the topics of our Conversation at Birmingham.—I trust however you will let me know. I really am ashamed of my great negligence towards you, in not writing, making resolutions is you know in such cases usually of little consequence but really I will try to be better in future, & for my excuse hitherto you must bear in mind that I have worked harder this last 6 Months than ever I did in my life—you think, I might easily do that & without injuring myself?—Possibly so, but still I have really fagged—I wanted to get this Bridge & I had a good many competitors.—I am more fitted for out door Work than the office, and would rather meet tenfold greater difficulties, than those I have even enumerated before,—than be compelled to office Work, & in which I fear I should never particularly shine.—As it is here I am tolerably my own Master and do as I please. I suppose too by time the Bridge is finished I shall have become acquainted with most of the people round, as it is at present I only know the Engineer I dine with tomorrow what we shall do if it is a day like this has been I know not,—probably amuse ourselves by making faces at each other all the Afternoon.—You ask me what I think of the Strike,—perfectly agree with the Masters, but think they have not acted wisely in closing their Works.—To have let those Work who would & even to have taken on unskilled hands and taught them their trade, would in my opinion have done far more to have annihilated the amalgamated Society & with much less injury to the Masters than the closing their works,—for in the course of a few Months the men who held out would have found themselves supplanted by a fresh race, & thrown upon the trade as supernumerary hands—whilst the Shop being open would have afforded them a good opportunity of gradually going to work, & that way in my opinion the society would soon have lost the bulk of its members—As regards the expediency of certain friends of ours closing their Works, it appears to me the most absurd & suicidal plan wh could have been adopted, & my own idea is, they will find to their Cost they have been entirely duped, & that vanity & a love of meddling has urged them upon a course of which they know not the consequences.—Well I am sure I must be boring you with this insensate epistle & so I will say adieu,—& hoping to hear from you soon & with kind remembrances to your family,

P.S.—You are far behindhand in your address to me at Birmingham, I left there Months ago, ever since the woman cried into my vegetable dish because I spoke crossly whilst bringing the dinner one Sunday.—My present address there is | 21 George St. | Spring Hill.—

{4} This is evidently the word intended, but the spelling is unclear.