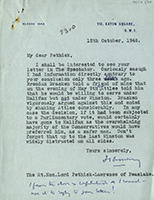 112 Eaton Square, S.W.1.—His view of the circumstances under which Churchill became Prime Minister has been corroborated by Brendan Bracken.

I shall be interested to see your letter in The Spectator. Curiously enough I had information directly contrary to your conclusion only three days ago. Brendan Bracken told a friend of mine that on the evening of May 9th 1940 Attlee told him that he would be willing to serve under Halifax but not under Winston. Bracken vigorously argued about this and ended by shaking Attlee considerably. In any case the decision, if it had been subjected to a Parliamentary vote, would certainly have gone to Halifax as the overwhelming majority of the Conservatives would have preferred him, as a safer man. Don’t forget that up to the last Winston was widely distrusted on all sides.

I fear the above is confidential so I cannot use it to reply to your letter!