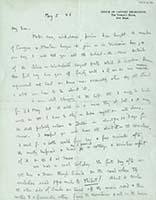 [Viceregal Lodge, Simla.]—Meetings with members of Congress and the Muslim League have begun. They will probably return to Delhi in about nine or ten days. Describes an excursion into the country and other activities. Refers to her letter in The Times.

(Letter-head of the Office of Cabinet Delegation at New Delhi, but evidently written at Simla.)

Motor cars, rickshaws, ponies have brought the members of Congress & Muslim league to join us in discussion here, & one day I will tell you all the behind-the-scene details of the Alice-in-Wonderland’s croquet party which it involves. However the first day has gone off fairly well & if we are no nearer agreement at least we know more accurately where they all stand & wht we have to do about it.

I am still clinging to the hope tht I may be back for 26 May but it will be a near thing at best & it may well be tht I have to stay in India right on into June. We shall probably return to Delhi in about 9 or 10 days fm now. I expect you will hear all about it on the wireless. I went for a little walk from here a few minutes after the meeting dispersed & heard as I passed in a cottage a wireless report of it on the 6 o’c news.

We had a real holiday the first day after we got here & drove through Simla on the road when the milestone read 190 miles to Thibet! About 4 miles the other side of Simla we turned off the main road & then walked to a fascinating cottage facing the mountains & out on the lawn we had a picnic lunch. Walking back part of the way we encountered a troop of monkeys in the tree tops jumping from branch to branch. One, a young mother, had a baby tucked under one arm but jumped with the rest. Our bedroom windows are covered with wire netting so tht monkeys cant get in when the window is open, but I havent seen many in these grounds.

Since Thursday {1} I have been very busy but I have arranged to get some walks & some games of golf. There are shots over walls & all sorts of hazards which the Viceroy & his one-armed son {2} negotiate to perfection; & nearly every night I play a game of billiards on a rather ancient table with uncertain balls & rather crooked cues. Sometimes the whole company looks on. It is the Viceroys birthday today & I proposed his health.

I have had 2 letters from you full of good things {3}. I had missed your excellent letter in th Times {4}. You shd have received my letter about Kashmir {5} the day after your second one was written.

We had a thunderstorm on Friday afternoon & evening all over the ranges & ranges of hills that ring this place. It was really very wonderful & brought down the air temperature to a moderately wam English summer day.

All my love to my own darling & if 12th May hasnt actually passed when you get this my special love for tht.

Just Your own
Little Boy

I am very well & sleeping well.

The address printed on the writing-paper is ‘Office of Cabinet Delegation, The Viceroy’s House, New Delhi’, but the letter was clearly written at Simla. There are a number of characteristically abbreviated words, including ‘tht’ for ‘that’.

{3} These letters have not survived.

{4} The reference is to a letter published in The Times on 25 April (p. 5), appealing for donations to provide personnel to assist in famine relief in India. The letter was subscribed by Lady Pethick-Lawrence, Elizabeth M. Cadbury, T. Edmund Harvey, Lord Lindsay of Birker, and Carl Heath, and contributions were to be sent to the Friends Service Council.