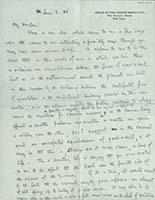 Office of Cabinet Delegation, The Viceroy’s House, New Delhi.—Proposes the idea that an equilibrium is ordained in the world between good and evil. The work of the mission is likely to reach a crisis in the next few days.

Here is an idea which came to me a few days ago tht seems to me interesting & possibly new though you may have come across it before. It appears to me to be the case that in this world of ours in which we live there is ordained an equilibrium between the forces of good & evil. Just as in the astronomical world the planets are held in their courses by the balance between the centripetal force of gravitation & the centrifugal tendency created by their own motion, & in the atomic world the protons continue to whizz round the nucleus for similar reasons & positive & negative electricity are equal & opposite {1}, & in the human being spirit & matter balance one another, so I suggest in the moral world an unexpected equilibrium of good & evil, & it may be tht this is, strange as it may seem, a law of life. This is something like a saying tht you once quoted to me to the effect tht the devil was the fourth side of the square of the divine. If it is true, it would account for the fact tht the moment anything good appears an element of evil springs up to destroy it & vice versa. It may also be the reason why in this world a rise & fall must occur on the wheel of existence. The equilibrium must not be confused with stagnation. A river is constantly flowing down to the sea and yet year in and year out rain & evaporation keep a fairly constant volume of water in it. A school has roughly the same proportion of scholars in its classes from year to year & yet each child is progressing through the curriculum.

Of course like all other macrocosmic laws there is nothing in this as a guide of conduct for the microcosm whose duty must always be to pursue the highest tht he can see at any one time.

It is a relaxation for me to think on such things & to be able to write to you about them. I have talked about them to Melicent† Shepherd. She is a little puzzled as to how they fit in to her Christology, but she is such a dear & so broadminded that it will do her no harm & she does not resent it.

My labours here continue unabated. The days tht lie immediately ahead are likely to be days of crisis & anything may come out of them. I hope to be able to leave about June 15 but it is all quite problematical. I enjoy getting your letters. I love you passionately. I slept all night after spending hours preparing a document. It is very hot. I had a little drive yesterday & visited some sights. I do hope I shall be back before the end of June at any rate. They threaten to cut off our bathes if the water people go on strike.

All my love my darling
Boy

The abbreviation ‘tht’ for ‘that’ occurs a few times.