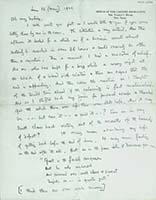 Office of Cabinet Delegation, The Viceroy’s House, New Delhi.—The situation is critical. Discusses the attitudes of the various parties. Is dining with a Dutch collector of Indian folk-songs (Arnold Bake).

I will write you just as I would talk to you if you were sitting close by me in the room. The situation is very critical. And this afternoon it looked for a while as if a decision would almost certainly be reached in some 36 hours & could scarcely be other than a rejection. For a moment I had a sensation of relief. As one who has kept for a long while a weary vigil at the bedside of a beloved sick relative & there are signs that the end is approaching. And then came the reaction as I thought of the terrible time ahead if the calamity in fact materialised. And so I stifled back my desire for personal escape & thanked God tht while there was life there was still hope. And it may be - - - but can it - - & will it - -? Can we in very truth claw back victory out of the mouths of the hounds of defeat? It may mean abandoning my hope of getting back before the end of June. It may mean failing in the end after it all. But as in the poem John X Merriman gave us.

Everyone takes the situation differently. Alexander is frankly angry but will I think play the game by his colleagues even at great personal inconvenience. Cripps refuses to be discouraged. He has postponed his passage home. The Viceroy is the soldier fighting gallantly a rearguard action. Gandhi in his own peculiar way is at the moment fighting three quarters on our side. Several others desperately want a peaceful settlement, and with them are many of the general public. But there are many reckless men & women who eagerly hope for a break down & a return to revolutionary activities. And there are many who blame every one but themselves & reserve their choicest epithets of abuse for the Mission.

My only really cool hours are when I am in the Viceroys specially air-cooled study & when I am in the swimming pool or my private bath. I get a short walk at 7 AM & another at 7 PM & occasionally I play billiards. Otherwise I just work & negotiate & discuss & read the papers & days a week. But I pray tht I do so to the glory of God.

I have had many dear letters from you but I do not think there has been anything especial tht required an answer. It is an intense satisfaction to me tht you keep well.

Jan 13 {2} Miss Shepherd has gone south to the marriage of her sister. Before she left she told me of a Dutch man & his wife who have spent years collecting Indian folk songs {4}. They are coming to see me after dinner to night. We had quite a heavy shower of rain last night but the real monsoon is not expected for another ten days or so.

My dear love to you, blessed & beloved

The abbreviation ‘tht’ for ‘that’ occurs a few times.

{1} The reference is to the last stanza of William Watson’s poem ‘In Laleham Churchyard (August 18, 1890)’, which runs as follows:

‘Great is the facile conqueror;
Yet haply he, who wounded sore,
Breathless, unhorsed, all covered o’er
With blood and sweat,
Sinks foiled, but fighting evermore,—
Is greater yet.’

{2} The square brackets are original.