Item 72 - Letter from M. A. Jinnah to Lord Pethick-Lawrence 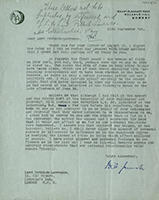 Letter from M. A. Jinnah to Lord Pethick-Lawrence

Mount Pleasant Road, Malabar Hill, Bombay.—The prospect of clearing up the breach of faith on the part of the English (i.e. the postponement of the formation of an interim government) is hampered by recent events of a much worse character. As for the apparent discourtesy shown to him by members of the Cabinet Mission in June, he considers the matter closed and would never, in any case, allow personal feelings to affect his handling of issues which affect millions of people.

Thank you for your letter of August 16. I regret the delay as I was so rushed and pressed with other matters that I could not help putting off my reply to you.

As regards the first point—the breach of faith on your part, you say, that, perhaps some day we may be able to clear up. But since the 25th of June so many other things have taken place, which are of much worse character with far-reaching consequences and we have been stabbed in the back. However, as yours is only a purely personal letter and not a political one, I will confine myself entirely to the second point: that you never intended to show any discourtesy to me in the course of the interview at the Viceroy’s House on the late afternoon of June 25.

Believe me that although I had felt at the moment and was rather hurt at the behaviour of your colleagues and yourself, with perhaps one exception i.e. Mr. Alexander at the interview, but, a few days before his departure, when he came to see me and conveyed to me on behalf of your colleagues and yourself that they never intended to be discourteous to me, I asked him to convey to you and the others that as far as I was concerned the matter was closed and I expressed the hope that it would not affect us so far as our personal relations were concerned. I assure you that whatever may happen, or has happened, believe me, I shall never allow the element of personal rancour or bitterness to influence me in the slightest degree in handling the issues at stake in India which affect millions of people. I have never allowed any personal feelings to influence me in the past and I bear no ill-will towards anyone and entirely receiprocate† that our personal relationships would remain friendly.

Yours sincerely,
M. A. Jinnah

At the head of the sheet is written in pencil, ‘These letters not to be published, by expressed wish of late Lord Pethick-Lawrence. | Esther E Knowles, 1st May 1962.’ Alongside is written, probably by Vera Brittain, ‘noted’.

{1} i.e. the formation of an interim government.