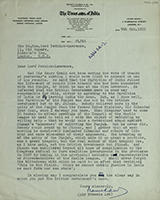 ‘The Times of India’, 4 Albemarle Street, London, W.1.—Responsibility for the partition of India does not lie with the British Government, as implied by Sir Henry Craik at yesterday’s meeting of the East India Association, but with Jinnah.

Had Sir Henry Craik not been moving the vote of thanks at yesterday’s meeting I would have liked to comment on one of his remarks. He said that the Partition of India ruined the life-work of people like himself who had been connected with the Punjab, of which he was at one time Governor. He inferred that the British Government were in some way responsible for this, either by agreeing to the Partition of India or by leaving India too soon. But, as I know well, the Partition of the Punjab was due not to the British Government but to Mr. Jinnah. Nobody believed more in the unity of the Punjab than its former Prime Minister, Sir Sikandar Hyat Khan, who I daresay you know. When Sikandar used to come to Bombay to attend meetings of the Council of the Muslim League he used to tell me—with the object of enlisting my willing help—that he would make a determined stand against Jinnah’s “nonsense” of splitting the Punjab. But he never did. Nobody could stand up to Jinnah, and I gather that at each meeting he completely dominated Sikandar and others of like mind and made mincemeat of their arguments. The breaking up of the unity of the Punjab, which made it so great a province, was a great tragedy, but the real author of that tragedy was, as I have said, not the British Government, but Jinnah. And Jinnah was embittered beyond all hope of conciliation by the Congress refusal to form coalition governments in the provinces in 1937 by taking in the provincial cabinets a representative or representatives of the Muslim League. I shall never forget the bitterness with which he said to me after that decision: “This is the finish. Since we cannot obtain justice in India we must form our own state”.

In closing may I congratulate you on the clear way in which you put the British Government’s case.