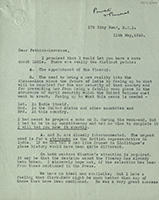 179 City Road, E.C.1.—Raises the questions of the appointment of a new Viceroy and the future security of India. Suggests that Clark Kerr might make a capable Viceroy.

I promised that I would let you have a note about India. There are really two distinct points:

A. The appointment of the Viceroy.

B. The need to bring a new reality into the discussions about the future of India by facing up to what will be required for the war security of that country and for preventing her from being a fatally weak piece in the structure of world security which the United Nations must want to erect. Facing up to what this means is needed—
1st. In India itself.
2nd. In the United States and other countries and
3rd. In this country.

I had meant to prepare a note on B. during the week-end, but I had to be in my constituency and had no time to complete it. **I will let you have it shortly.

A. and B. are closely interconnected. The urgent need is for a statesman as the British representative in India. If we had a man like Cromer in Linlithgow’s place history would have been quite different.

On both matters Winston’s attention is required. It may be that the decision is about the Viceroy has already been taken. I sincerely hope not, if the selection has been from those mentioned in the Press.

We have no ideal man available; but I have a feeling that Clerk-Kerr might be much better than any of these that have been mentioned. He was a very great success in China and has the reputation of having done well in Russia. That could mean a lot in India.