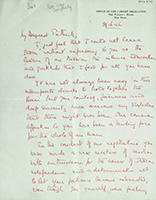 Office of the Cabinet Delegation, The Viceroy’s House, New Delhi.—Expresses, on the eve of his departure from India, his admiration and gratitude for Pethick-Lawrence’s conduct as leader of the Mission.

I just feel that I could not leave India without expressing to you as the leader of our Mission the intense admiration and gratitude that I feel for all you have done.

It has not always been easy in this intemperate climate to hold together the team but your courtesy, fairness and deep sincerity have overcome any obstacles that there might have been. Our common affection to you has been a binding force for the whole of our team.

In the conduct of our negotiations you have made a wise mixture of caution with enthusiasm for the cause of Indian independence and a determination not to let your patience become exhausted, even though you yourself were feeling physically exhausted.

It has been a tremendous privilege and joy to me to be associated with you in this historic enterprise and I believe that you can be satisfied with the contribution that you have made to World History.

Though it is true that the results are those of the team it is to you that the major share of the credit must justly be given. Your unremitting labours, the high trust in which the Indian leaders held you and your convincing sincerity have created an atmosphere of trust amongst the Indian people different to anything known from the earliest times of British occupation.

The superficial and partisan attempts to discredit your work are not I am convinced reflecting anything but the anger of disappointed politicians.

Our “home life” here in Willingdon Crescent, a most important factor in our work, has been happy and restful because of the knowledge of the “Father of our party”.

We have all learnt to love our leader with unrestrained affection and I regard it as the highest privilege that I should have been allowed to serve under and with you during these last 3½ months.