Part No. 3 - List of requirements and recommendations for a tour in Greece, compiled by E. D. Clarke 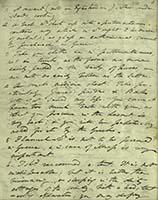 List of requirements and recommendations for a tour in Greece, compiled by E. D. Clarke

1. A servant (not an Englishman) who understands cooking.

2. A bed w[hic]h shuts up into a portmanteau—canteens, every article in w[hic]h ought to be made of metal; as glass & earthenware cannot be purchased in Greece.

3. Take your clothes &c in portmanteaus, not in trunks, as the former are more easily packed on the backs of horses, & are not so easily broken as the latter.

4. A small medicine chest. Take particularly James’s powder & Bark both of w[hic]h saved my life. You cannot have too much bark with you, as what you procure in the Levant is very bad; & you will be perpetually asked for it by the Greeks.

5. Flannel—w[hic]h is not to be procured in Greece, & in case of illness is very important.

6. I sh[oul]d recommend a tent. It is not indispensable; but it is better than bivouacing, or sleeping in the dirty cottages of the country. With a bed, tent & cooking apparatus, you may defy the filth of the Grecian Khans & houses w[hic]h is not inconsiderable.

7. A military cloth cloak, water-proof & made so as to cover you completely while lying down.

8. As the winters are very short you will want very few woollen clothes—take plenty of nankeen & other thin dresses.

9. Lay in a good stock of tea either at Malta or Gilbraltar. In Greece it is very scarce & bad; & after fatigue or during illness it is most valuable. Coffee you will get every where. If you have plenty of room in your baggage a cargo of portable soup you will find very often of service.

10 Do not omit to take an umbrella—not for protection against rain, but against the sun.

11. Begin your days journey before sun rise—& lie by during the heat of the day. Avoid the evening dews & in every thing conform to the customs & advice of the natives

11. Take a Thermometer—a long tape line divided into feet & inches for the measurement of buildings—a foot rule—a compass—knives—pencils—with powder—telescope—pistols—a sword &c &c. If you have not use for all these things you will find them very acceptable presents to the natives when you wish to oblige any one.

12. Arrowsmiths large map of Constantinople & its environs. It is in general very correct though deficient in names. In going from place to place mark carefully the number of hours it takes you to perform the stage—& the name of every village & town, or the road, omitted by Arrowsmith. Such an itinerary through Greece wd be very valuable—By your compass mark particularly the course of the famous rivers.

13. D’Anvilles maps of antient Geography w[hic]h will be invaluable to you in a tour through Greece. He is sometimes wrong in the position he assigns to antient towns & you will be able to correct him.

15 I sh[oul]d take a Hist. of Greece—perhaps Gellius is best for a tour—& a good selection of Greek Authors—Homer—Strabo & Pausanias are quite necessary. You will read in the verses of the former, descriptions of manners w[hic]h are not yet extinct amongst the Greeks & I particularly request you to notice all the domestic arrangements, or religious ceremonies of the modern Greeks. I received a great deal of amusement from that research & generally found the prototype in the antient poets. It is surprising how little they have changed in many respects.

16. Villoison in the preface to his Homer says that in a mountainous district between Epidaurus & Nauplia in the Peloponnesus, dwell {1} the Tzacones, descended from the Spartans, who retain the antient form of expression more than any of the Greeks. This will be a very curious subject to investigate if you have an opportunity

17. If you go to Yanina there are several objects of research in the neighbourhood. At a small distance are the ruins of a theatre w[hic]h is supposed to be on the scite of the antient Cassiope†. It is one of the finest in Greece. Make a tour from Yannia to Suli. In that neighbourhood is the district in w[hic]h the antients placed the descent to the Infernal regions. Two rivers flow near Suli supposed to be Cocytus & Acheron. Trace them to the sea & observe whether they do not first fall into a marsh or lake, the Acherusia palus, according to the description of Thucydides B. I. The whole tract of country near Suli is well worth seeing independent of its classical interest as its features are of a very grand & sublime cast. To the N. of Yanina the ruins of Dodona at the distance of some days journey are still visible as I was informed by a Greek of information Athanas Balidar {1} with w[ho]m you will become acquainted at Yanina

18. Visit the vale of Tempe w[hic]h is very beautiful—Ælian’s description (in his Var. Hist.) you will find very accurate[.]. Visit Caterina a place under Olympus to the N. of Tempe. There are in it I was informed marbles & inscriptions w[hic]h may perhaps be important. Ascertain if possible the height of Olympus & the other great mountains as Parnassus & Pindus.

Alisson {1} to the N. of the Peneus you may visit & try to make out the inscriptions there w[hic]h are much defaced. At Thermopylæ trace the pass. You will find the warm springs & some of the river mentioned; as the Spercheus—but the pass is very much widened except in some parts.

Delphi is a very interesting place. The remains of the temple of Apollo are under a shed at the top of the village & the walls are covered with inscriptions. The Castalian fountain falls between the two peaks of Parnassus. You may search for the Corycian cave w[hic]h has not yet been determined. By Pausanias’ account it is some way up the mountain. There is a stadium above the village. The Games were celebrated below in the vale. Try to find the Hippodrome

At Livadia try to determine from Pausanias w[hic]h is the cave of Trophonius; what they shew you as such may possibly be so but in some respects it does not answer to his description.

At Thebes there is hardly any thing to be seen. You may determine from the Poets & Historians w[hic]h is the Cadmæa†, the mountain of the Sphinx—& Dirce.

On the road from Thebes to Athens you will pass over mount Parnes—& about the place where you first get a view of Athens, was situated Phyle. There is an old ruined tower in this position w[hic]h I conjectured to have been part of Phyle. This you may investigate

The frontier town of Decelia w[hic]h was fortified by the Spartans in the Peloponessian war was situated somewhere on this range—though I imagine further to the East & nearer Athens. Its position has often been enquired after & never accurately determined. It will be worth while to pay some attention to its investigation. From some passages in Thucyd. & Xenophon it appears that it was so near the Piræus that ships sailing into that port were discernible from it. It was therefore on high ground & you may probably find its scite somewhere on the Northern parts of the plain of Athens between Parnes & Hymettus.

Between Livadia & Thebes visit Chæronea & Orchomenus where are marbles & inscriptions. Here & every where else copy faithfully what inscriptions you see[.] Near Chæronea see whether there are any remains of the Copaic {2} lake, & whether it is as famous for its eels now as it was in the time of Aristophanes.

At Athens you will find a† excellent Cicerone in Famuel† who will explain & point out every thing. There are there two rivers the Ilissus to the E. of the Acropolis—the Cephissus to the W. I want to know whether they unite before they reach the sea. Will you take the trouble to ascertain this—& also whether we dont pass over a bridge across the Cephissus in the way to the Piræus

Visit the I. of Ægina where there is a beautiful temple

Crossing from Ægina to the Peloponessus go to Epidaurus & from thence to a place called Tero {1}, where there are several ruins particularly a very magnificent theatre the finest in Greece.

Go from thence to Argos, Nauplia di Romania, Tiryns a very curious old town the walls of w[hic]h are as old as Homer’s time—Mycenæ, where are some very interesting ruins—Nemea

From Argos go to Tripolizza & in the neighbourhood see the {1} ruins of Tegea & Mantinæa. At the latter place observe the course of the river. It was turned I think by Agis, when he besieged the place, so as to make a breach in the walls of the town.

From Tripolizza to Leondari & from thence to Sparta. The ruins of old Sparta are very inconsiderable, & situated about 2 miles to the E. of the modern town Alistra {1}. Observe whether in going from Leondari to Sparta you cross the Eurotas, or whether you keep all the way on the left bank

From Sparta visit Mania†, if possible, though I believe it is an enterprise attended with some difficulty. The Maniotes are independent, & do not acknowledge the power of the Turks. They are the only Greeks who have preserved their freedom.

From Sparta cross Taÿgetus to Calamata, or if that is not practicable return to Leondari & from thence proceed along the Southern parts of Arcadia w[hic]h are very beautiful to Caritena & Andruzzena. At the latter place enquire for a guide to shew you the σηλαι {1} & you will be conducted to the ruins of the temple of Apollo Epicurus at Phygalia, which are situated on the borders of Arcadia & Messenia in a most romantic solitude.

From hence visit Messenia if you can. I did not see it, & therefore cannot give you any directions.

From Andruzzena go to Olympia (now called Miracca) & endeavour to determine the position of the temple of Jupiter[,] the stadium, the Altis or sacred grove[,] the Cronium or hill of Saturn mentioned so often by Pindar.

From Olympia to Pyrgo[,] thence to Gastugni, in the neighbourhood of w[hic]h are the ruins of Elis w[hic]h are insignificant—thence to Patrass & so on along the romantic shores of Achaia to Corinth.

At Corinth see an old temple, & if possible get admittance to the Acro-Corinthus.

Investigate the Isthmus—Lechæum & Cenchreae the two ports of Corinth & see whether you can find any remains of the canal w[hic]h was begun across the narrowest part of the Isthmus. The ruins of the wall built by the Peloponessians are visible

Cross part of Mt Œneus {1}, & Cithæron to Megara. On the road are very fine views of the Isthmus & the two seas.

From Megara to Eleusis & thence to the Via Sacra of Athens.

Keep a full & accurate journal of every thing you see, w[hic]h you ought to write on the spot, & never trust to memory even for a day.

{2} Followed by a superfluous comma.