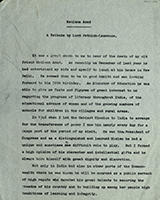 Copies of a paper entitled ‘Maulana Azad: A Tribute by Lord Pethick Lawrence’

It was a great shock to me to hear of the death of my old friend Maulana Azad. As recently as December of last year he had entertained my wife and myself to lunch at his house in New Delhi. He seemed then to be in good health and was looking forward to his 70th birthday. As Minister of Education he was able to give me facts and figures of great interest to me regarding the progress of literacy throughout India, of the educational advance of women and of the growing numbers of schools for children in the villages and rural areas.

In 1946 when I led the Cabinet Mission to India to arrange for the transference of power I saw him nearly every day for a large part of the period of my visit. He was then President of Congress and as a distinguished and learned Moslem he had a unique and sometimes a difficult role to play. But I formed a high opinion of his character and intellectual gifts and he always bore himself with great dignity and discretion.

Not only in India but also in other parts of the Commonwealth where he was known he will be mourned as a public servant of high repute who devoted his great talents to securing the freedom of his country and to building up among her people high traditions of learning and integrity.