Item 66 - Copy of a letter from M. K. Gandhi to Sir Stafford Cripps 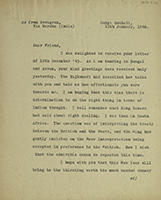 Copy of a letter from M. K. Gandhi to Sir Stafford Cripps

Camp: Gauhati (‘as from’ Sevagram, Via Wardha).—Acknowledges the receipt of his letter, and expresses the hope that ‘this time there is determination to do the right thing in terms of Indian thought’.

As from Sevagram, | Via Wardha (India)

I was delighted to receive your letter of 19th December ’45. As I am touring Bengal and Assam, your kind greetings were received only yesterday. The Rajkumari {1} had described her talks with you and told me how affectionate you were towards me. I am hoping that this time there is determination to do the right thing in terms of Indian thought. I well remember what King Edward had said about right dealing. I was then in South Africa. The question was of interpreting the treaty between the British and the Boers, and the King had gently insisted on the Boer interpretation being accepted in preference to the British. How I wish that the admirable canon be repeated this time.

I hope with you that this New Year will bring to the thirsting earth the much needed shower of peace and goodwill for which the “Prince of Peace” lived and died.