Item 10a.45 - Album of autographs of members of Trinity College, Cambridge, collected by Henry Coggin 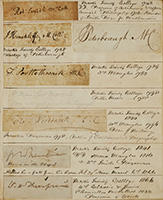 Album of autographs of members of Trinity College, Cambridge, collected by Henry Coggin

1 volume (17 x 20 cm), containing 31 leaves. Pasted to ff. 1r-8v are about 120 signatures cut from letters or other documents. Also pasted into the book are six letters, each comprising a single sheet, one each on ff. 9r-11r and one inside the front cover. Quarter-bound in black leather and card covered with marbled paper.

Henry Coggin was born at Old Lambeth in 1823 but spent most of his life in Cambridge. He started work at Trinity College as a young teenager about 1837 and, judging by the 1841 census, in which he is simply described as a ‘servant’, began his career living in the College. During the next decade he married, moved to 10 James Street, and began a family, and in the 1851 census he was described as a ‘College Cook’s Clerk’, which probably represents a promotion from his original position. He eventually rose to be head clerk and cashier, and retired in about 1891 after 54 years’ service. A keen rifleman, he was a member of the first English eight to take part in an international shooting competition, in Belgium. After his retirement he moved with his second wife to a house at Chiswick which he named ‘Trinity’, and he died there in 1912, aged 88.

The signatures in this book were presumably collected by Coggin during his working life at Trinity, but the book was probably compiled about 1891, the year in which he retired, since Coggin's notes have the appearance of having been written during a short period, and the signature of A. P. Humphry on f. 5r (the only one written directly into the book), is dated 7 September 1891. At least one item, a letter from Humphry to Coggin dated in 1896, was added a few years later; but the other four letters, which were all written to either Humphry or his father, were probably given to Coggin while he was still at Cambridge, perhaps at the time Humphry wrote in the book.

As the letter pasted inside the front cover indicates, the book was preserved among the papers of Coggin's son, the Rev. H. T. J. Coggin, and on his death in 1942 passed to his son H. F. F. Coggin, who presented it to Trinity College Library the following year.

The title on the front free endpaper is 'Autographs | Collected by | Henry Coggin | Trinity College, Cambridge'.

Pasted to the leaves of the book are about 120 signatures cut from letters or other documents and 6 letters. The first group of signatures (f. 1r) are those of all the Masters of the College from Robert Smith (Master, 1742–68) to W. H. Thompson (Master, 1866–86) except William Lort Mansel, the space where the latter would go being occupied by the pencil note, ‘Have not yet got this Autograph’. The autograph of Henry Montagu Butler, who succeeded Thompson as Master, appears later in the book, as Coggin had already obtained it when Butler was a Fellow.

The Masters’ signatures are followed by those of various senior and notable members of the College, including Fellows, noblemen, prize-winners, high-achieving graduates, and sportsmen. They include the signature of the Marquess of Lorne, who later married Queen Victoria’s daughter Princess Louise, and who, Coggin notes, was ‘One of last of the Fellow Commoners, who wore blue gowns with silver lace & were allowed to dine at the Fellows table’, and a few pages later is the autograph of I. J. Jermy, admitted in 1840, who Coggin notes was ‘Murdered with his Father at Stanfield Hall Norfolk Nov[embe]r 28th 1848 by James Blomfield Rush who was hung at Norwich April 21st 1849’. Below this is the only autograph of a female in the book, that of Eliza Chasteney, identified as ‘Lady’s Maid to Mrs Jermy Sen[io]r who in attempting to save her Mistress’s Life from the Murderous designs of the villian [sic] Rush was wounded in several parts of the body.’

The signatures are followed on ff. 9r-11r by five complete letters. Inside the front cover is a letter to the College Librarian from the donor. See the individual descriptions for details.