Item 318 - Carbon copy of a letter from F. W. Pethick-Lawrence to Herbert Morrison 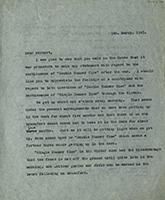 States his objections to double summer-time and to single summer-time in winter, and expresses the hope that these measures will not be continued after the war.

“Single Summer Time” in the Winter also had the disadvantage that the frost is not off the ground until quite late in the morning, and neither garden nor field can be worked in the hours following on breakfast.

“Double Summer Time” means similarly, that at any rate in the month after it begins and the month before it ends, the fields and the garden are saturated with dew long after work on them should begin.

While the war is on we acquiesce in temporary changes which are we understand desired by industrialists, though many of them I am sure hate getting up in the dark as we do. But we hope the Home Office will refuse, after the war, to continue changes which are advocated partly by those late risers who never get up in the dark in any case, and who imagine that “Summer Time” and “Double Summer Time” add one extra to the hours of daylight.