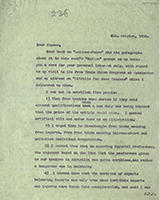 Carbon copy of a letter from F. W. Pethick-Lawrence to J. M. Keynes

Summarises his recent address to the Free Trade Union Congress on ‘Pitfalls for Free Traders’, which provoked a surprising amount of indignation.

Your book on “Laissez-Faire” {1} and the paragraphs about it in this week’s “Nation” prompt me to write you a word for your personal interest only, with regard to my visit to the Free Trade Union Congress at Manchester and my address on “Pitfalls for Free Traders” which I delivered to them.

I set out to establish five points:

1) That free traders were unwise if they said without qualifications when a new duty was being imposed that the price of the article would rise. I quoted artificial silk and motor cars as an illustration.

3) I warned them that in opposing Imperial Preference, the argument based on the idea that the preference given to our traders in Australia was quite worthless, was rather a dangerous one to maintain.

4) I warned them that the doctrine of exports balancing imports was only true when invisible exports and imports were taken into consideration, and said I was doubtful whether any economists to-day (when there are pools of unemployment in various countries, unstable and artificial exchanges, and politically created loans, reparations, etc.) would be prepared to put his hand upon his heart and say that the current effect of an order for a million pounds placed abroad, would be identical with the same order placed at home.

5) I warned them that free traders must not be indifferent to labour conditions if they wanted to continue to have the support of the majority of the people of this country, and that though I thought tariffs were the wrong way, some consideration ought to be devoted to the question of production under sweated conditions in other lands.

I was purposely controversial but I was hardly prepared for the storm of indignation which I evoked. Every one of my points was very hotly challenged and had there been more time I should have had a torrent of opposition to meet. All the same, one or two of the best men in the meeting afterwards said that though they did not necessarily agree with everything, they thought there was a great deal of truth in what I had said.

Do not trouble to reply to this letter: I thought you would be amused to know how little some of the Manchester free traders have moved with the times.