Item 26 - Carbon copy of a letter from Lord Pethick-Lawrence to W. Glenvil Hall 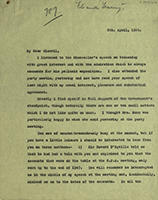 Carbon copy of a letter from Lord Pethick-Lawrence to W. Glenvil Hall

Is broadly in support of the Government’s financial policy. Would like to hear his views on (1) further postponing the adjourned CPA meeting till the accounts are ready, and moving the room of the General Council’s secretary; (2) an anomaly in the calculation of estate duty; and (3) his own article in the Contemporary Review.

I listened to the Chancellor’s speech on Wednesday with great interest and with the admiration which he always commands for his pellucid exposition. I also attended the party meeting yesterday and now have read your speech of last night with my usual interest, pleasure and substantial agreement.

Broadly I find myself in full support of the Government’s standpoint, though naturally there are one or two small matters which I do not like quite so much. I though Mrs. Mann was particularly happy in what she said yesterday at the party meeting.

You are of course tremendously busy at the moment, but if you have a little leisure I should be interested to hear from you on three matters:—1) Sir Howard D’Egville told me that he had had a talk with you and explained to you that the accounts that were on the table at the C.P.A. meeting, only went up to the end of 1947. You will remember he interrupted me in the middle of my speech at the meeting and, incidentally, mislead† me as to the dates of the accounts. In all the circumstances I hope you agree that it is better to postpone the adjourned meeting of the members until we have got the 1948 accounts also to give to them. I am afraid it will not be until the end of June or the beginning of July. I daresay you and I shall be meeting one day in the House of Commons before then; and I would also like to discuss with you this question of whether the room for the General Council’s Secretary should be in future actually adjoining the rooms of the United Kingdom Branch or nearby.

2) I am rather sorry that when the Chancellor was tidying up the death duties (and incidentally making a considerable increase in the estate duty which will involve substantial alterations in wills of large testators who leave specified sums to various persons, and particularly to widows) that he did not rectify an anomaly which causes testators a good deal of inconvenience. I refer to the different method of dealing with slices of the gross amount for estate duty and surtax respectively. In the latter, the taxpayer has no particular interest in getting his gross figure below certain limits, whereas in the former the higher rate is charged not only on the slice but on the gross total so that a very small change makes a great deal of difference. I am aware of course that adjustments are made, but in view of the present high rates of taxation, this method is surely both inconvenient and unsatisfactory. Consider for instance the case of a man whose gross estate is in the neighbourhood of a hundred thousand pounds. If it is just below a hundred thousand pounds, he pays tax under the new scheme at 45% leaving him for distribution fifty-five thousand pounds. As I understand it, it is not until he reaches over a hundred and ten thousand pounds gross (which will pay 50%) that he obtains any larger sum for distribution. Similar anomalies occur on other marginal figures. The net result is surely not very healthy because a testator with assets close to one of the marginal figures is deprived of all incentive to save as the tax amounts to 100% on part of the capital.

Would it not be better to adopt the surtax method on slices for death duties? In any case will you consider this, and will you consider whether some explanation might be given of how the prospective tax works out on successive slices. It is quite true that the big fry might be alarmed at the very large proportion which the higher slices will have to pay, but some of our labour supporters may be equally satisfied that the rich are contributing so much. I hope however that if this is done next year the Chancellor will not take the opportunity of putting up still further the rates. Will you also consider, unless it has already been made fully clear, precisely when all the changes in death duties come into operation so that testators will know just what they have to face and when. For instance what about the case of A deceased in 1948 leaving a life interest to B who dies in 1950. What does C the remainderman have to pay?

3) When I last saw you, you were good enough to say that you would look at my article in the January issue of the “Contemporary Review”. If you have managed in your busy life to do so I should be interested to know how it struck you.