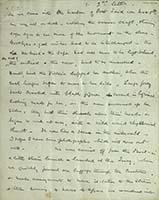 Describes her arrival in Egypt and her first few days there.

As we came into the harbour of Port Said on Nov. 8th we were all on deck—watching the various craft, straining eager eyes to see more of the movement on the shore. Goodbyes & good wishes had to be interchanged—the tried & the safe had once more to be left behind, the call of the untried & the new, had to be answered.

Hardly had the Victoria dropped her anchor, when the coal barges began to move to her side. Large ferry boats crowded with black figures, covered in begrimed sacking made for her, & the men swarmed up her sides: they held their shovels above their heads & began to work at once, with a wild weird rhythmical chant. It was like a scene in the underworld. I hope I have some photographs which will come out well. We were carried off from the Boat in a little steam launch & landed at the Quay, when we quickly passed our luggage through the Customs, & made arrangements to have it taken to the station—& then having 4 hours to spare we wandered into the streets & bazaars, & sat on the Verandah of the Hotel Continental, drinking coffee, while the street sellers came round, showing fans, and beads & postcards, & jewelry—and a good deal of laughing & bargaining went on. We bought a few little things & got a vast amount of amusement out of it. The streets were planted with acacia trees which gave delightful shade—the whole scene was like Earls Court on a much larger scale, with the sharp lights & shadows of an Eastern sun, intensifying all the effect. The glamour of sunset began to fall, and from the station we saw our first Egyptian sunset—a sheet of burning amber. We reached Cairo about midnight after a very happy & comfortable journey. We rattled through the lighted streets in Shepheard’s van, were shown to our rooms at once, made our first bow to the mosquito curtains—slept, & woke in the morning to see that our windows opened upon a garden with tall palm trees & red paths, a black robed arab pacing up & down.

Cairo,—Well, no city I have ever yet seen is a bit like it, but the spirit of it, is the spirit of Paris—colour, light—animation that Europe knows nothing of—fascination every turn. After a certain amount of business had been accomplished we took a little carriage & drove down to the Bazaars—where we had a great time & great fun—they brought us coffee, & turkish delight—& perfumes—& spread out their wares: it was very hard to tear myself away but it had to be done, for we must send our luggage off to Mena House in a cart—and we ourselves must take the train & get there in time for dinner. The sun was setting, as we caught our first sight of the Pyramids—from this moment the fascination of the country deepens & deepens upon us. Mena House is perfectly beautiful, in design & architecture & in every detail. It is built in the style of a mosque & is in itself a work of art—& a museum of beautiful things: not one thing out of place—all absolutely harmonious. It opens right on the desert. Something unnameable & undescribable takes possession of our spirit, filling us with happiness & excitement, a sort of fulness & overflow of life. The next morning we go out on the desert & our lunch is sent out to us. The arabs come about us & sit down & talk—and show their scarabs & treasures—they show us their letters from English friends, of which they are very proud. A funeral winds its way over the desert to the little Arab cemetery in the sand, amid voices of wailing—camels pass—Arabs riding upon horses & donkeys. In the sun the heat is great but when we sit under the shadow of the Pyramid it is quite cool, even cold. Hetty is inquiring for her old friend, a Bedouin sheikh, Abdul Enani Hatab—presently he comes across the desert to greet her, a tall fine-looking Arab, in robes of silk, and a very beautiful turban of richest Damascus silk. This is the man who besought Hetty to become the queen of his tribe. He spent the day with us—in the afternoon we took camels & rode to the Sphynx—& watched the sunset & stayed until it was dark. An old Sheikh, a sand diviner came & sat down by Marie & talked to her. We were alone with the Arabs—our camels lying there waiting—and the glamour of the desert strong upon us all. The next day again we go out to the Sphinx at sunset & Abdul tells us a wonderful story of the desert—in low thrilling tones as the night darkens—he has “a great boxful of stories” he says. We are right in it all now, bathed in the desert, steeped in the desert. Only two days! It seems impossible—all too wonderful, like a dream. We are talking now of travelling further south in a dahabeah, with tents for camping out, & coming back on camels in caravan. Abdul & his brother come from Beni Mora, the scene of Hitchen’s new book—“The Garden of Allah”—they know Amara, & all the places in that book. It is just four weeks journey on camels through the desert. I should like to go that journey some day.

[Endorsement:]
Circular letter.
Please follow the same order as before. In haste to catch mail.

This letter appears to have been written on 11 November, the date of the last events described in it. A few alterations have been made to the punctuation of the original, which is erratic and often indistinct.