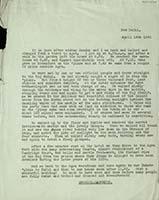 New Delhi.—Gives an account of a morning excursion by plane to Agra.

(Mechanical copy of a typed original.)

It is just after midday Sunday and I am back and bathed and changed from a visit to Agra. I got up at 5.30.a.m. and after a walk in the garden left the house at 6.30. We reached the aerodrome at 6.45. and almost immediately took off. At 7.15. they gave us breakfast on the ’plane and at 7.40 we came down a couple of miles outside Agra.

We were met by one or two official people and drove straight to the Taj Mahal. We had already caught a sight of it from the ’plane. But from a height of two or three thousand feet, land objects are somewhat dwarfed. At the outer entrance the Agra archaeologist met us and took charge of us. We walked slowly through the archways and along by the water duct in the middle, stopping every now and again to get a new vista of the Taj itself. As we neared it the delicacy and beautiful colours of the inlaid texts from the Koran stood out in the burning sunlight against the dazzling white of the marble of the main structures. I think all the party that had come with us (and in addition to those who came in the ’plane some had come overnight in the train or by car—about 120 miles) were enchanted. I of course had seen it several times before, but its outstanding beauty is undimmed by repetition.

We walked up to the floor and inside and admired the carved lattice-work marble and the lovely inlays. Then we walked all round it and saw the Jumna river behind very low down in the absence of rain, and noted the play of sunlight on the main building and the four minarets. Then we walked slowly away back, turning every now and again to catch a final glimpse.

After a few minutes rest at the hotel we then drove to the Agra Fort with its many interesting Courts, almost reminiscent of a Cambridge Court, and halls and marble fret-work, its distant view of the Taj from the prison where Shab {1} Jehan is alleged to have been detained during the later years of his life.

And so back to the Agra aerodrome and once again in our Dakota ’plane to Delhi and then to our house soon after 11.30. What a wonderful morning! So much to have seen and done before many people are fully awake and bathed and dressed and breakfasted!

Mechanical copy of a typed original.